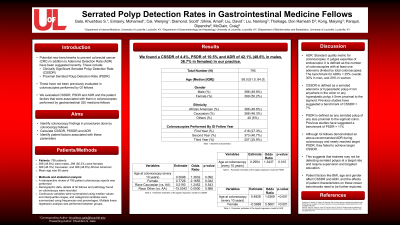 Introduction: Clinically Significant Serrated Polyp Detection Rate (CSSDR) and Proximal Serrated Polyp Detection Rate (PSDR) have been suggested as potential new benchmarks to prevent colorectal cancer (CRC) (CSSDR = 7% and PSDR = 11%), in addition to Adenoma Detection Rate (ADR) (ADR = 25% overall, 30% in men, and 20% in women). CSSDR is defined as a serrated adenoma or hyperplastic polyp ≥1cm anywhere in the colon or any hyperplastic polyp ≥ 5mm proximal to the sigmoid, whereas PSDR is any serrated polyp of any size proximal to the sigmoid colon. We evaluated CSSDR, PSDR and ADR and the patient factors that were associated with them in colonoscopies performed by gastrointestinal (GI) medicine fellows.

Discussion: Although GI fellows demonstrated an above-recommended ADR during colonoscopy and nearly reached target PSDR, they failed to achieve target CSSDR. This suggests that trainees may not be detecting serrated polyps at a target rate, and require supervision and targeted education. Patient factors like BMI, age and gender affect CSSDR and ADR, and the effects of patient characteristics on these newer benchmarks need to be further explored.