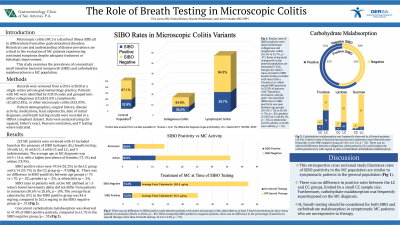 Introduction: Microscopic colitis (MC) is a diarrheal illness difficult to differentiate from other gastrointestinal disorders. Historical cues and understanding of disease prevalence are critical to the evaluation of MC patients experiencing continued symptoms despite adequate treatment or histologic improvement. This study examines the prevalence of concomitant small intestine bacterial overgrowth (SIBO) and carbohydrate malabsorption in a MC population.

Discussion: This retrospective cross sectional study illustrates rates of SIBO positivity in the MC population are similar to symptomatic patients in the general population (Fig 1). There was no difference in positive rates between the LC and CC groups, limited by a small CC sample size. Furthermore, carbohydrate malabsorption was frequently superimposed on the MC diagnosis, highlighting the need to consider H2 breath testing for both SIBO and carbohydrate malabsorption in symptomatic MC patients who are unresponsive to therapy. 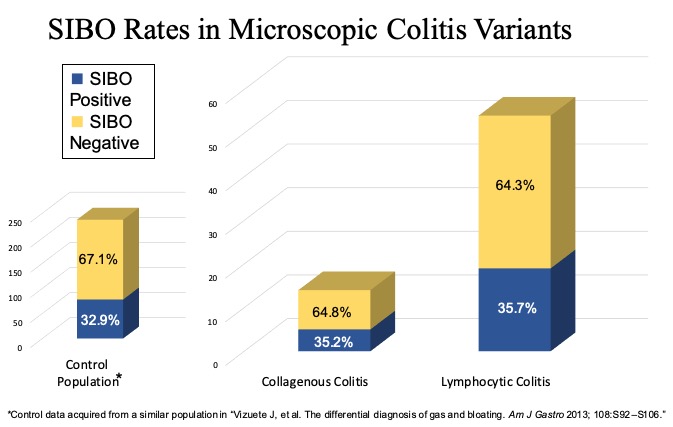 Fig 2: There was no difference in SIBO positive rates between patients with active microscopic colitis (described as at least 3 bowel movements per day) versus patients in remission (30.6% vs 28.6%, p = .89). When comparing SIBO positive to negative patients, there was no difference in the percentage of patients on steroid therapy at the time of breath testing (12.0 vs 14.3%, p = .79). 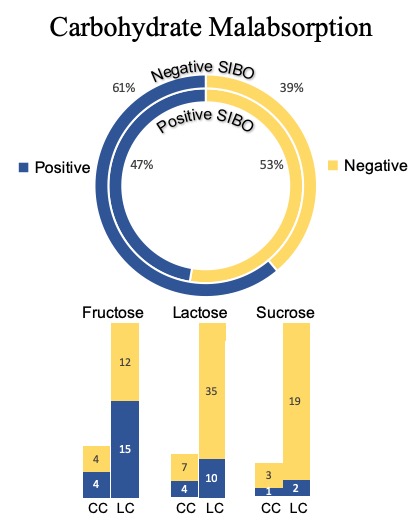