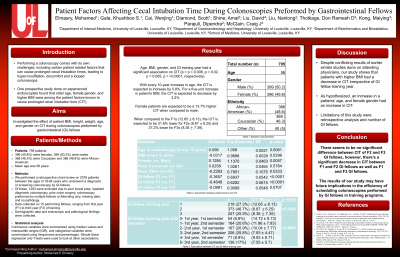 Introduction: Performing a colonoscopy does not come without challenges. Certain patient-related factors can cause prolonged cecal intubation times, leading to hyper-insufflation, discomfort and a looped colonoscope. One prospective study found that older age, female gender, and higher BMI were among the patient factors known to cause prolonged cecal intubation time (CIT). However, these studies only examined colonoscopies performed by experienced endoscopists. In this retrospective study, we collected data on gastrointestinal (GI) fellows performing colonoscopies and investigated the effect of patient BMI, height, weight, age, and gender on CIT.

Methods: A Retrospective review of 795 patients undergoing colonoscopy at an urban university hospital were analyzed. Demographic data, colonoscopy time points including CIT and GI fellow training year were collected. CIT was calculated by subtracting the time of scope insertion and time the cecum was reached. Continuous variables were summarized using median values and interquartile ranges (IQR), and categorical variables were summarized using frequencies and percentages. A linear model was used to compare BMI to CIT. Simple linear regression and T-tests were used to look at other associations.

Discussion: Despite conflicting results of earlier similar studies done on attending physicians, our study shows that patients with higher BMI had a decrease in CIT irrespective of GI fellow training year. As hypothesized, an increase in a patients’ age, and female gender had an increase in CIT. Limitations of this study were retrospective analysis and number of GI fellows. The results of our study may have future implications in the efficiency of scheduling colonoscopies performed by GI fellows in training programs.