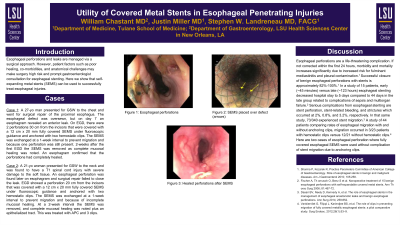 Introduction: Management of esophageal perforations and leaks is traditionally managed via a surgical approach, however, here we show that self-expanding metal stents (SEMS) can be used to successfully treat esophageal injuries.

Discussion: Esophageal perforations are a life-threatening complication. If not corrected within the first 24 hours, morbidity and mortality increases significantly due to increased risk for fulminant mediastinitis and pleural contamination.1 Successful closure of benign esophageal perforations with stents is approximately 82%-100%.1 In a study of 15 patients, early (~45 minutes) versus late (~123 hours) esophageal stenting decreased hospital stay to 5 days compared to 44 days in the late group related to complications of  sepsis and multiorgan failure.4 Serious complications from esophageal stenting are stent perforation, stent-related bleeding, and strictures which occurred at 2%, 0.8%, and 3.2%, respectively. In that same study, 73/340 experienced stent migration.5 A study of 44 patients comparing rates of esophageal migration with and without anchoring clips, migration occurred in 3/23 patients with hemostatic clips versus 12/21 without hemostatic clips.6 Here are two cases of esophageal perforation where fully covered esophageal SEMS were used without complication of stent migration due to anchoring clips.