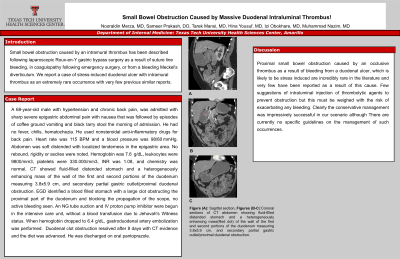 Introduction: Small bowel obstruction caused by an intramural thrombus has been described following laparoscopic Roux-en-Y gastric bypass surgery as a result of suture line bleeding, in coagulopathy following emergency surgery, or from a bleeding Meckel's diverticulum. We report a case of stress-induced duodenal ulcer with intramural thrombus as an extremely rare occurrence with very few previous similar reports.

A 68-year-old male with hypertension and chronic back pain, was admitted with sharp severe epigastric abdominal pain with nausea that was followed by episodes of coffee ground vomiting and black tarry stool the morning of admission. He had no fever, chills, hematochezia. He used nonsteroidal anti-inflammatory drugs for back pain. Heart rate was 115 BPM and a blood pressure was 98/60 mmHg. Abdomen was soft distended with localized tenderness in the epigastric area. No rebound, rigidity or ascites were noted. Hemoglobin was 7.6  g/dL, leukocytes were 9800/mm3, platelets were 330.000/mm3, INR was 1.08, and chemistry was normal. CT showed fluid-filled distended stomach and a heterogeneously enhancing mass of the wall of the first and second portions of the duodenum measuring 3.8x5.9 cm, and secondary partial gastric outlet/proximal duodenal obstruction. EGD identified a blood filled stomach with a large clot obstructing the proximal part of the duodenum and blocking the propagation of the scope, no active bleeding seen. An NG tube suction and IV proton pump inhibitor were begun in the intensive care unit, without a blood transfusion due to Jehovah's Witness status. When hemoglobin dropped to 6.4 g/dL, gastroduodenal artery embolization was performed.  Duodenal clot obstruction resolved after 8 days with CT evidence and the diet was advanced. He was discharged on oral pantoprazole.

Discussion: Proximal small bowel obstruction caused by an occlusive thrombus as a result of bleeding from a duodenal ulcer, which is likely to be stress induced are incredibly rare in the literature and very few have been reported as a result of this cause. Few suggestions of intraluminal injection of thrombolytic agents to prevent obstruction but this must be weighed with the risk of exacerbating any bleeding. Clearly the conservative management was impressively successful in our scenario although There are currently no specific guidelines on the management of such occurrences 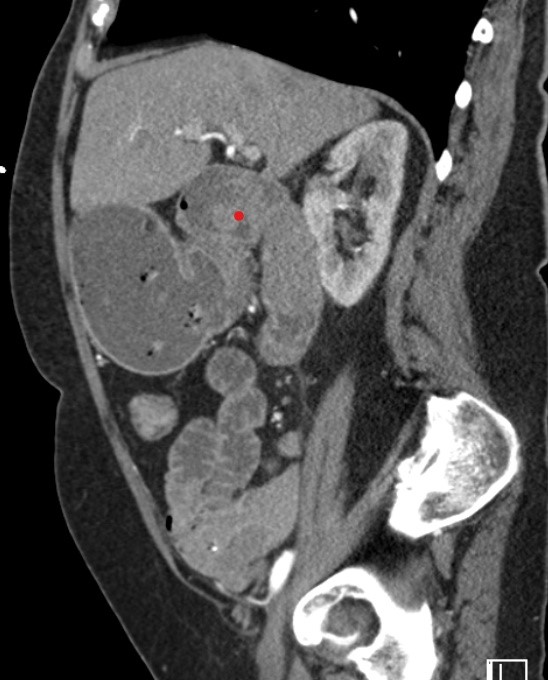 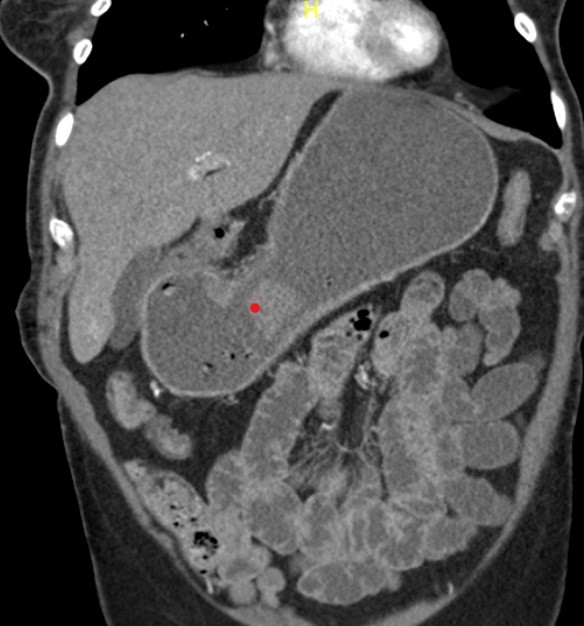 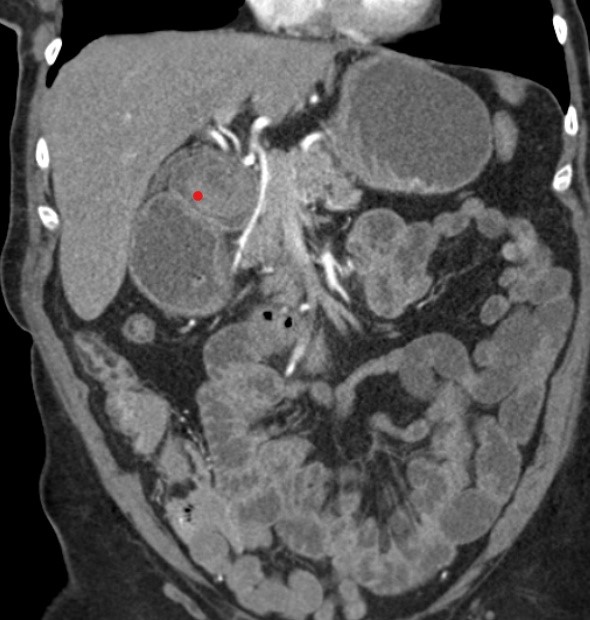