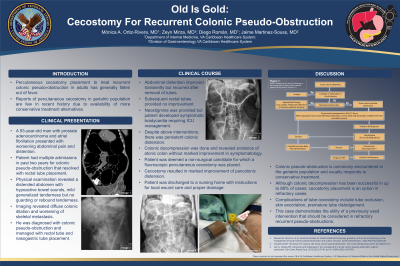 Introduction: Percutaneous cecostomy placement to treat recurrent colonic pseudo-obstruction in adults has generally fallen out of favor and is more commonly used in the pediatric population. Reports of percutaneous cecostomy in geriatric population are few in recent history due to availability of more conservative treatment alternatives. This is a case of refractory chronic colonic pseudo-obstruction in a geriatric patient was successfully managed with cecostomy placement.

Methods: A 93 year-old male with prostate adenocarcinoma, atrial fibrillation who complained of worsening abdominal pain and distention. He described having this sensation over the past two years and had multiple prior admissions for management of colonic pseudo-obstruction requiring rectal tube placement. Examination revealed a distended abdomen with hypoactive bowel sounds, mild generalized tenderness, no guarding or rebound. Imaging revealed diffuse colonic dilation and worsening of skeletal metastasis. He was diagnosed with colonic pseudo-obstruction and managed with rectal tube and nasogastric tube placement. Abdominal distention improved but after removal of above tubes his distention recurred. Multiple rectal tubes were placed without improvement for which a trial of neostigmine was provided during which patient developed symptomatic bradycardia requiring ICU management. Despite all the above interventions, patients remained with persistent colonic distension for which colonic decompression was done. Procedure demonstrated evidence of atonic colon without marked improvement in symptomatology. Patient was not a surgical candidate for which a fluoroscopic percutaneous cecostomy was placed. Procedure was successful and demonstrated marked improvement of pancolonic distension without complications. Patient was discharged to a nursing home with instruction for local wound care and proper drainage.

Discussion: Colonic pseudo-obstruction is commonly encountered in the geriatric population that usually responds to conservative treatment.  Although colonic decompression has been successful in 88% of cases; in unresponsive cases tube cecostomy can be done. This case demonstrates the utility of a previously used intervention that may provide benefit when patients do not improve. Despite the possible complications of tube cecostomy including tube occlusion, skin excoriation, premature tube dislodgement, it is an alternative that may be considered in recurrent pseudo-obstructions that do not resolve after multiple interventions.