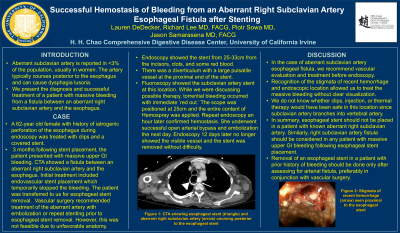 Introduction: We present diagnosis and successful treatment of a patient with massive bleeding from a fistula between aberrant right subclavian artery and esophagus.

Methods: A 62-year-old female had esophageal perforation during endoscopy which was treated with clips and a covered stent.  She developed upper GI bleeding 3 months later due to a fistula between an aberrant right subclavian artery and the esophagus.  Endovascular stenting reportedly controlled her bleeding and she was transferred to us to remove the esophageal stent which was believed to have caused the fistula.  Vascular surgeons planned for angiogram and stenting and/or embolization prior to endoscopic removal of the stent.  However angiographic therapy was not possible due to the existing stents and the unfavorable vascular anatomy.  Endoscopy showed the stent from 25 - 33cm from the incisors, clots and some red blood.  There was a diverticulum with a large pulsatile vessel at the proximal end of the stent. Fluoroscopy showed the subclavian artery stent at this location.  While we were discussing possible therapy, torrential bleeding occurred with immediate ‘red out.’  The scope was positioned at 25cm and the entire contents of Hemostatic Powder was applied.  Repeat endoscopy an hour later confirmed hemostasis.  She underwent successful open arterial bypass and embolization the next day.   Endoscopy 12 days no longer showed the visible vessel and the stent was removed without difficulty.

Discussion: Aberrant subclavian artery is reported in < 3% of the population with up to ¾ being in women.  The artery courses posterior to the esophagus in 80% and resulting impingement can lead to rare cases of dysphagia known as dysphagia lusoria.  Worse yet, arterial fistula have been reported after nasogastric tube and stent placement.  The cause of bleeding was correctly diagnosed in our patient, but treatment with uncovered metal stents did not close the fistula.  Thus we knew that simply removing the esophageal stent as requested would result in catastrophic bleeding and had planned for endovascular treatment before endoscopy.  Recognition of the stigmata of recent hemorrhage as well as the location allowed us to successfully treat the massive bleeding without clear visualization. 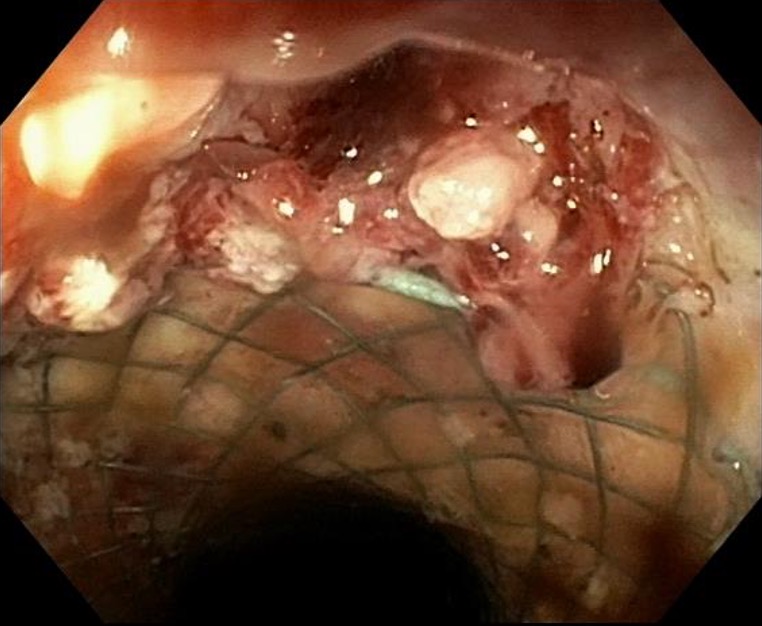 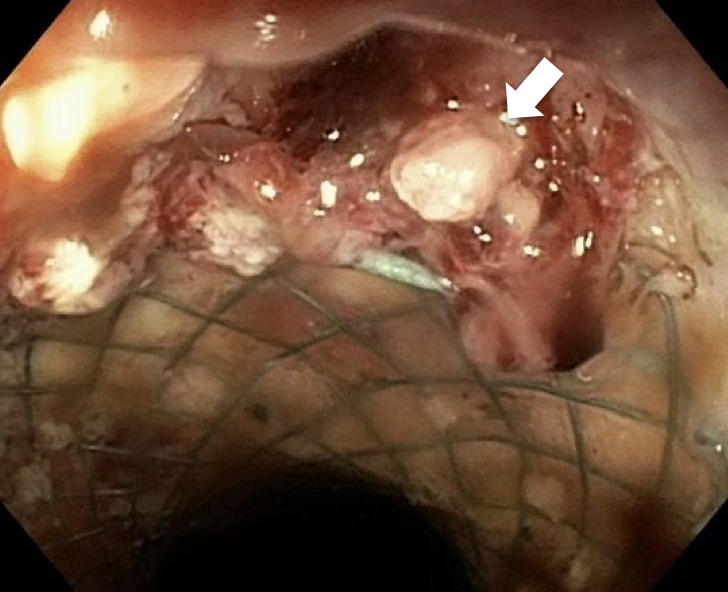