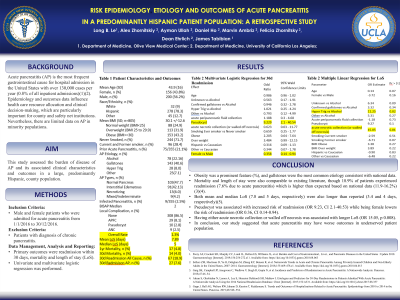 Introduction: Acute pancreatitis (AP) is the most frequent gastrointestinal cause for hospital admission in the United States with over 130,000 cases per year (0.8% of all inpatient admissions). Epidemiology and outcomes data influence health care resource allocation and clinical decision-making, which are particularly important for county and safety net institutions. Nevertheless, there are limited data on AP in minority populations. This study assessed the burden of disease of AP and its associated clinical characteristics and outcomes in a large, predominantly Hispanic, county population.

Methods: Patients from the three county hospitals comprising the Los Angeles Department of Health Services (LADHS), the second largest municipal healthcare system in the country, were considered for inclusion. Using a combination of International Classification of Disease (ICD) codes and lipase values, patients admitted with AP in LADHS between January and December 2016 were identified. Electronic medical records were individually abstracted for pertinent data and to exclude patients without AP. The primary outcomes were all cause mortality and readmission. Statistical analyses were performed with student’s t and chi-squared tests, as well as general linear model and logistic regression.

Discussion: Based on this study of a large, predominantly Hispanic population, there appears to be a 50% higher rate of hospital admission for AP as compared to national data (1.2% vs 0.8%). Obesity was a prominent feature, and gallstones were the most common etiology, similar to national statistics. Mortality and length of stay were comparable to those in the published literature, though nearly 20% of patients experienced re-admission, a rate higher than expected based on national data (11.9%-16.2%).