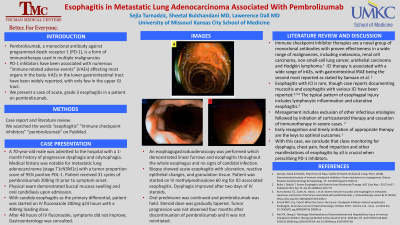 Introduction: Pembrolizumab, a monoclonal antibody against programmed death receptor 1 (PD-1), is a form of immunotherapy used in multiple malignancies. PD-1 inhibitors have been associated with numerous “immune-related adverse events” (irAEs) affecting most organs in the body. IrAEs in the lower gastrointestinal tract have been widely reported, with only few in the upper GI tract. We present a case of acute, grade 3 esophagitis in a patient on pembrolizumab.

Methods: Case report and literature review. We searched the words “esophagitis” “immune checkpoint inhibitors” “pembrolizumab” on PubMed.
A 70-year-old male was admitted to the hospital with a 1-month history of progressive dysphagia and odynophagia. Medical history was notable for metastatic lung adenocarcinoma (stage T1cN3M1c) with a tumor proportion score of 95% positive PDL-1. Patient received 31 cycles of pembrolizumab 200mg IV prior to symptom onset. Physical exam demonstrated buccal mucosa swelling and oral candidiasis upon admission. With candida esophagitis as the primary differential, patient was started on IV fluconazole 200mg q24 hours with a 400mg loading dose. After 48 hours of IV fluconazole, symptoms did not improve; Gastroenterology was consulted. An esophagogastroduodenoscopy was performed which demonstrated linear furrows and esophagitis throughout the whole esophagus and no signs of candidal infection. Biopsy showed acute esophagitis with ulceration, reactive epithelial changes, and granulation tissue. Patient was started on IV methylprednisolone 60 mg for ICI-associated esophagitis. Dysphagia improved after two days of IV steroids. Oral prednisone was continued and pembrolizumab was held. Steroid dose was gradually tapered. Tumor progression was not observed four months after discontinuation of pembrolizumab and it was not reinitiated.

Discussion: Immune checkpoint inhibitor therapies are associated with a wide range of adverse events that can include the upper gastrointestinal system. Management includes initiation of corticosteroids and cessation of chemotherapy in severe cases. Early recognition and timely initiation of appropriate therapy are the keys to optimal outcomes. With the growing use of pembrolizumab in oncology, physicians must be aware of all potential irAEs. This case is one of the first to highlight acute esophagitis as one of its irAE. We conclude that close monitoring for manifestations of esophagitis is crucial when prescribing PD-1 inhibitors.

Linear furrows and esophagitis in the mid-esophagus