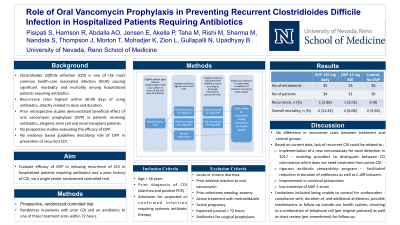 Introduction: Clostridioides Difficile Infection (CDI) is a common health-care associated infection causing significant morbidity and mortality. There has been a dramatic increase in the incidence and severity of CDI due to emergence of NAP1 strain, use of broad-spectrum antibiotics, PPIs, and prolonged hospitalization with 1-3 month recurrence rates of around 25%. There are currently no evidence-based guidelines describing the role of oral vancomycin prophylaxis (OVP) to prevent recurrent CDI, thus accounting for the wide variation in practice. We aimed to evaluate the efficacy of OVP in reducing recurrence of CDI in hospitalized patients receiving antibiotics with a prior history of CDI, via a single-center randomized controlled trial.

Methods: Study was commenced following IRB approval in March 2018. Primary objective was to evaluate the efficacy of OVP in reducing recurrence of CDI in in-patients with prior CDI and receiving antibiotics. Secondary goal was to determine the differences in rate of recurrent CDI stratified by various CD inducers, dose of OVP, NAP1 strain, concurrent PPI use, time interval from prior CDI and pre-existing risk factors. We randomized in-patients receiving antibiotics, with prior CDI, to one of three arms in a 1:1:1 ratio following inclusion and exclusion criteria. Group A, B and C received oral vancomycin 125mg daily, 125mg twice-daily and no oral vancomycin respectively. OVP was given until the completion of antibiotics for primary infection. Patients were evaluated 12 weeks following completion of OVP using a standardized questionnaire.

Results: 109 patients were randomized with zero rate of recurrence in all groups. Secondary objectives could not be determined due to null recurrence. Death due to causes unrelated to CDI was noted in 10.1% of the entire cohort, of which 5.1% occurred in treatment groups while 5% occurred in control group. Three or more episodes of diarrhea was reported by 18.2% patients during follow-up; 12.2% were among treatment groups.

Discussion: Our results indicate no difference in recurrence rates between treatment and control groups. Based on our data, lack of recurrent CDI in our facility could be related to the rigorous antibiotic stewardship program initiated prior to the commencement of this study, low incidence of NAP-1 strain in our study cohort, as well as a new immunoassay for toxin detection which distinguishes between CD colonization from active CDI.