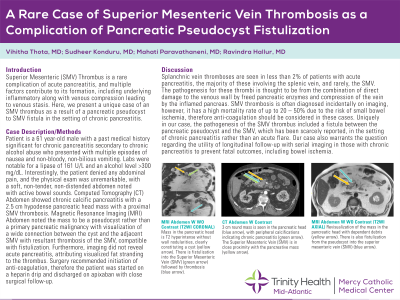 Introduction: Superior Mesenteric (SMV) Thrombus is a rare complication of acute pancreatitis, and multiple factors contribute to its formation, including underlying inflammatory along with venous compression leading to venous stasis. Here, we present a unique case of an SMV thrombus as a result of a pancreatic pseudocyst to SMV fistula in the setting of chronic pancreatitis.

Methods: Patient is a 61-year-old male with a past medical history significant for chronic pancreatitis secondary to chronic alcohol abuse who presented with multiple episodes of nausea and non-bloody, non-bilious vomiting. Labs were notable for a lipase of 161 U/L and an alcohol level >300 mg/dL. Interestingly, the patient denied any abdominal pain, and the physical exam was unremarkable, with a soft, non-tender, non-distended abdomen noted with active bowel sounds. Computed Tomography (CT) Abdomen showed chronic calcific pancreatitis with a 2.5 cm hypodense pancreatic head mass with a proximal SMV thrombosis. Magnetic Resonance Imaging (MRI) Abdomen noted the mass to be a pseudocyst rather than a primary pancreatic malignancy with visualization of a wide connection between the cyst and the adjacent SMV with resultant thrombosis of the SMV, compatible with fistulization. Furthermore, imaging did not reveal acute pancreatitis, attributing visualized fat stranding to the thrombus. Surgery recommended initiation of anti-coagulation, therefore the patient was started on a heparin drip and discharged on apixaban with close surgical follow-up.

Discussion: Splanchnic vein thromboses are seen in less than 2% of patients with acute pancreatitis, the majority of these involving the splenic vein, and rarely, the SMV. The pathogenesis for these thrombi is thought to be from the combination of direct damage to the venous wall by freed pancreatic enzymes and compression of the vein by the inflamed pancreas. SMV thrombosis is often diagnosed incidentally on imaging, however, it has a high mortality rate of up to 20-50% due to the risk of small bowel ischemia, therefore anti-coagulation should be considered in these cases. Uniquely in our case, the pathogenesis of the SMV thrombus included a fistula between the pancreatic pseudocyst and the SMV, which has been scarcely reported, in the setting of chronic pancreatitis rather than an acute flare. Our case also warrants the question regarding the utility of longitudinal follow-up with serial imaging in those with chronic pancreatitis to prevent fatal outcomes, including bowel ischemia. 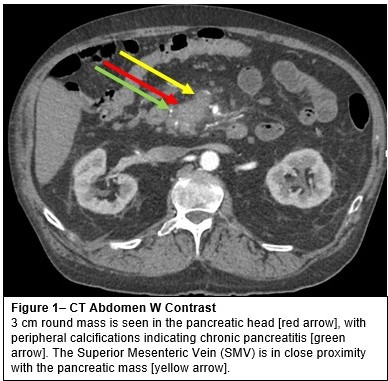 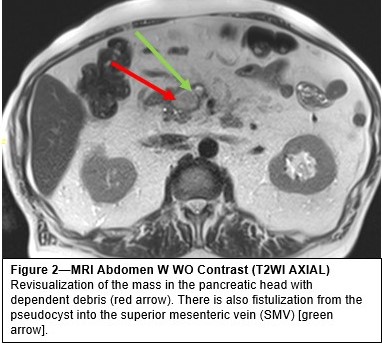 Figure 2- MRI Abdomen W WO Contrast (T2WI AXIAL)
Revisualization of the mass in the pancreatic head with dependent debris [red arrow]. There is also fistulization from the pseudocyst into the superior mesenteric vein (SMV) [green arrow]. 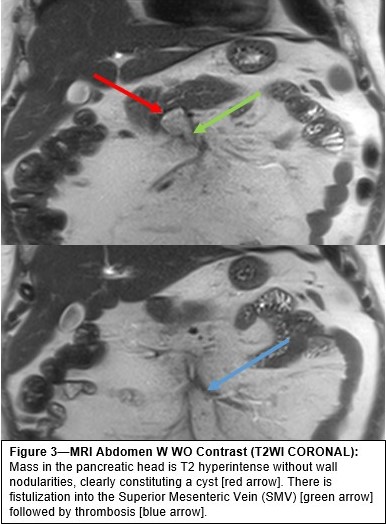