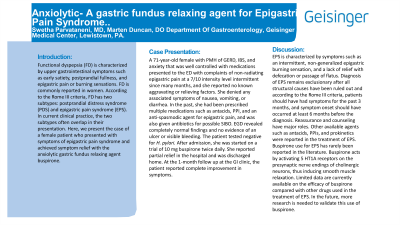 Introduction: Functional dyspepsia (FD) is characterized by upper gastrointestinal symptoms such as early satiety, postprandial fullness, and epigastric pain or burning sensations. FD is commonly reported in women. According to the Rome III criteria, FD has two subtypes: postprandial distress syndrome (PDS) and epigastric pain syndrome (EPS). In current clinical practice, the two subtypes often overlap in their presentation. Here, we present the case of a female patient who presented with symptoms of epigastric pain syndrome and achieved symptom relief with the anxiolytic gastric fundus relaxing agent buspirone.

Methods: A 71-year-old female with PMH of GERD, IBS, and anxiety that was well controlled with medications presented to the ED with complaints of non-radiating epigastric pain at a 7/10 intensity level intermittent since many months, and she reported no known aggravating or relieving factors. She denied any associated symptoms of nausea, vomiting, or diarrhea. In the past, she had been prescribed multiple medications such as antacids, PPI, and an anti-spasmodic agent for epigastric pain, and was also given antibiotics for possible SIBO. EGD revealed completely normal findings and no evidence of an ulcer or visible bleeding. The patient tested negative for H. pylori. After admission, she was started on a trial of 10 mg buspirone twice daily. She reported partial relief in the hospital and was discharged home. At the 1-month follow up at the GI clinic, the patient reported complete improvement in symptoms.

Discussion: EPS is characterized by symptoms such as an intermittent, non-generalized epigastric burning sensation, and a lack of relief with defecation or passage of flatus. Diagnosis of EPS remains exclusionary after all structural causes have been ruled out and according to the Rome III criteria, patients should have had symptoms for the past 3 months, and symptom onset should have occurred at least 6 months before the diagnosis. Reassurance and counseling have major roles. Other available agents such as antacids, PPIs, and prokinetics were reported in the treatment of EPS. Buspirone use for EPS has rarely been reported in the literature. Buspirone acts by activating 5 HT1A receptors on the presynaptic nerve endings of cholinergic neurons, thus inducing smooth muscle relaxation. Limited data are currently available on the efficacy of buspirone compared with other drugs used in the treatment of EPS. In the future, more research is needed to validate this use of buspirone.