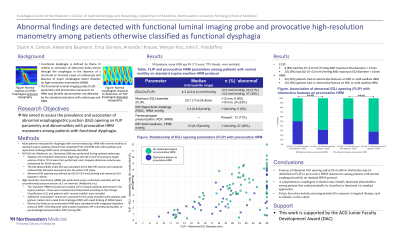 Introduction: Functional dysphagia is defined by Rome IV criteria as sensation of abnormal bolus transit through the esophagus in the absence of a structural or mucosal cause on endoscopy and absence of major esophageal motor disorder on high-resolution manometry (HRM). The functional luminal imaging probe (FLIP) and provocative HRM (pHRM) may identify abnormalities not detected by the standard evaluation with endoscopy and HRM. We aimed to assess the prevalence and association of abnormal esophagogastric junction (EGJ) opening on FLIP and abnormalities on pHRM among patients with functional dysphagia.

Discussion: Abnormal EGJ opening on FLIP and obstructive features on pHRM were detected in 41% of patients otherwise classified as functional dysphagia, while 10% had abnormalities both on both FLIP and pHRM.  A comprehensive esophageal evaluation may identify functional abnormalities among patients classified as functional via standard approaches. Future directions include assessing potential for response to targeted therapy, such as dilation, in this cohort.