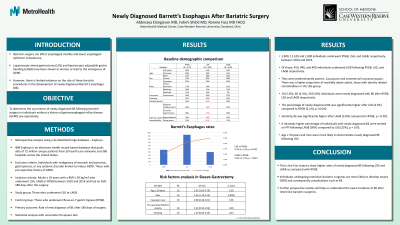 Introduction: Bariatric surgery can affect esophageal motility and lower esophageal sphincter competence. Laparoscopic sleeve gastrectomy (LSG) and laparoscopic adjustable gastric banding (LAGB) have been shown to worsen or lead to the emergence of GERD. However, there is limited evidence on the role of these bariatric procedures in the development of newly diagnosed Barrett’s esophagus (BE). Hence, we aimed to study the occurrence of newly diagnosed BE following bariatric surgery in individuals without a history of GERD pre-operatively.

Methods: Explorys, an electronic health record-based database was used for the current analysis. Individuals with BMI ≥ 30 kg/m2 who underwent LSG or LAGB, from 2010­ to 2019 were reviewed. For comparison, patients who underwent the bariatric procedure, Roux-en-Y gastric bypass (RYGB), known to reduce GERD, were also included. Individuals with malignancy of stomach and pancreas, gastroparesis, or any systemic disorder known to induce GERD were excluded. Using the temporal feature of Explorys, we excluded individuals with a pre-operative history of GERD. To identify individuals with post-surgical follow-up, those who underwent esophagogastroduodenoscopy (EGD) 180 days after surgery were included. Individuals were considered to have newly diagnosed BE following bariatric surgery when they have a ‘first-ever’ diagnosis of BE after 180 days of surgery. Among those with newly diagnosed BE, demographics, and the use of proton pump inhibitors (PPI) were analyzed using univariate analyses.

Discussion: This is the first study to show higher rates of newly diagnosed BE following LSG and LAGB as compared with RYGB. Thus, individuals undergoing restrictive bariatric surgeries are more likely to develop severe GERD and consequently complications such as BE. 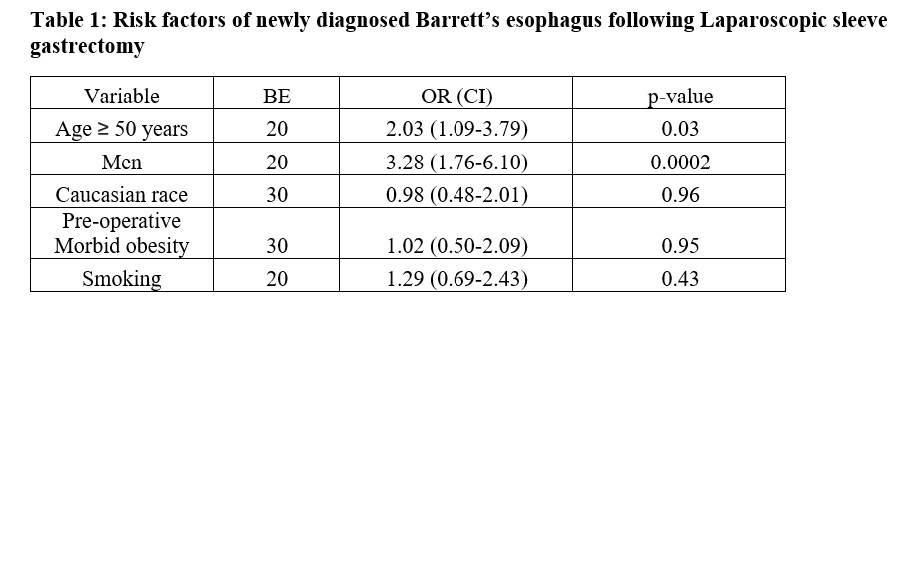