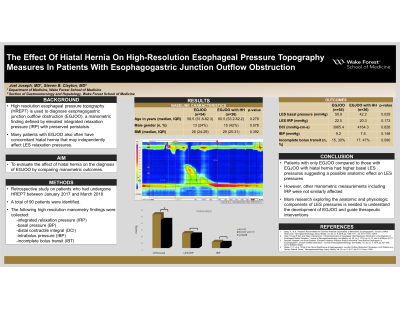 Introduction: High resolution esophageal pressure topography (HREPT) is used to diagnose esophagogastric junction outflow obstruction (EGJOO), a motility disorder with impairment of lower esophageal sphincter (LES) opening defined by an elevated integrated relaxation pressure (IRP) with preserved peristalsis. Many of these patients also have concomitant hiatal hernia (HH) that may independently affect LES relaxation pressures. This study aimed to evaluate the effect of HH on the diagnosis of EGJOO by comparing manometric outcomes at a single US tertiary care academic medical center.

Results: A total of 90 total patients were identified (n=54 EGJOO without HH, n=36 EGJOO with HH). In general, baseline characteristics were similar between groups with no significant differences in gender or age. Comparing patients with only EGJOO to those with both EGJOO and HH, there was a statistically significant difference in basal LES pressures (50.9 mmHg vs. 42.2 mmHg, p=0.029) but no difference in IRP (22.5 mmHg vs. 20.3 mmHg, p=0.173) between groups. Additionally there were no intergroup differences in DCI, IBP, or IBT.

Discussion: EGJOO is a heterogenous manometric diagnosis with many patients also experiencing anatomic defects including HH. Our study reports among the largest real-world comparisons of these groups. The observed higher basal LES pressures in patients with only EGJOO compared to those with both EGJOO and HH suggests a possible anatomic effect on LES pressures. However, this difference does not have affect other manometric measures including IRP which is currently the principal measure of outflow obstruction. Further work exploring the anatomic and physiologic components of LES pressure is needed to understand the development of EGJOO and guide therapeutic interventions.