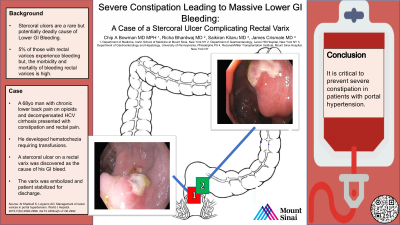 Introduction: Rectal varices are portosystemic collaterals that form as a complication of portal hypertension, with an estimated prevalence of up to 56% among patients with cirrhosis. While bleeding occurs in only about 5% of those with rectal varices, the morbidity and mortality of bleeding rectal varices is high. Here we present a case of a stercoral ulcer overlying a rectal varix, leading to massive lower gastrointestinal bleeding (LGIB).

Methods: A 68-year-old male with chronic lower back pain on opioids and decompensated hepatitis C virus cirrhosis complicated by multifocal hepatocellular carcinoma presented with abdominal distention, constipation, and rectal pain. Shortly after admission, he developed hematochezia. Lab work showed a drop in hemoglobin from 9gm/dL to 6gm/dL. CT of the abdomen showed significant stool burden. He underwent an extended colonoscopy preparation. A flexible sigmoidoscopy demonstrated a large nonbleeding polypoid rectal lesion that was superficially ulcerated and partially obstructing the anal canal. Endoscopic ultrasound was subsequently performed to further characterize this lesion. No endosonographically masses were noted. Instead, multiple medium sized varices were seen, one of which had a clean based ulcer without evidence of active bleeding, corresponding to the lesion previously identified on flexible sigmoidoscopy. The following day the patient developed additional episodes of hematochezia, requiring transfusion of packed red blood cells. The rectal varices were then embolized using a combination of coils and sodium tetradecyl sulfate foam via a transhepatic approach. He had no further episodes of rectal bleeding and was discharged home on a bowel regimen. 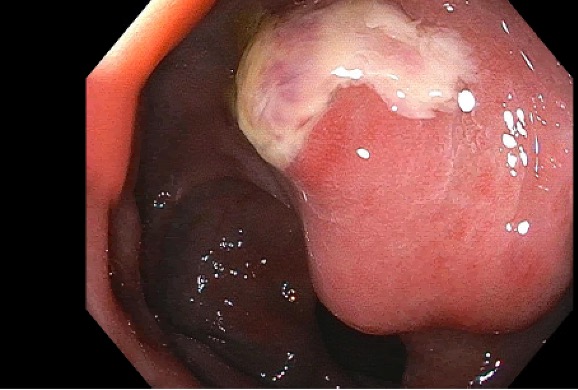 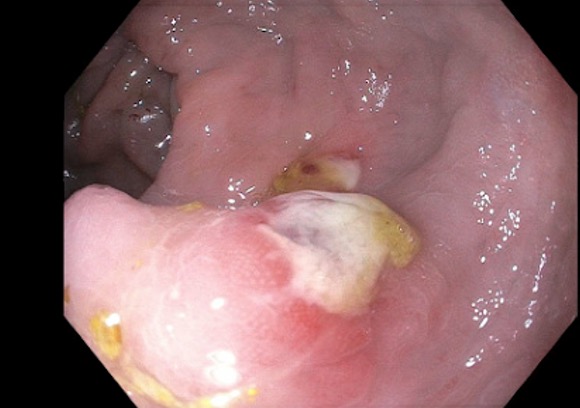