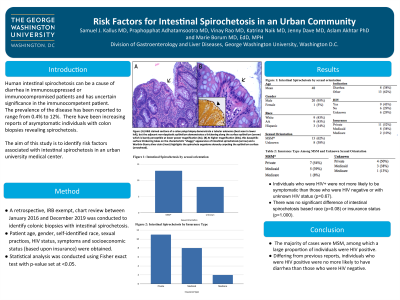 Introduction: Human intestinal spirochetosis can be a cause of diarrhea in immunocompromised patients and has uncertain significance in patients who are immunocompetent. The exact prevalence of the disease is unknown, but reports indicate that it may range from 0.4% to 12%. There have been increasing reports of asymptomatic individuals with colon biopsies revealing spirochetosis. The aim of this study is to identify risk factors associated with intestinal spirochetosis in an urban university medical center.

Discussion: This study characterized 21 cases of human intestinal spirochetosis in a diverse urban, U.S. population. Consistent with previously published data, the majority of cases were MSM, among which a large proportion of individuals were HIV positive. Differing from previous reports, this study revealed that individuals who were HIV positive were no more likely to have diarrhea than those who were HIV negative. While this study is limited based upon size and single institutional design, it offers a foundation for further research. Additional studies are necessary to understand risk factors, prevalence and presentation of intestinal spirochetosis.