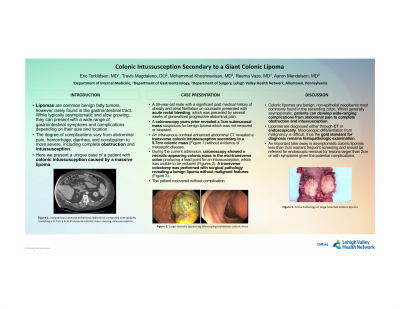 Lipomas are common benign fatty tumors found throughout the gastrointestinal tract. While typically asymptomatic, they can present with a wide range of gastrointestinal symptoms and complications pending their size and location. We report a unique case of a colonic intussusception caused by a massive lipoma.

Methods: A 59-year-old male with a significant medical history of obesity, obstructive sleep apnea, and atrial fibrillation presented with acute rectal bleeding, which was preceded by several weeks of generalized progressive abdominal pain. An intravenous contrast enhanced abdominal CT revealed a transverse colonic intussusception secondary to a 9.7cm colonic mass (Figure 1) without evidence of metastatic disease. A colonoscopy was performed, which revealed a giant necrotic-appearing colonic mass in the mid-transverse colon producing an intussusception which was unable to be reduced (Figures 2). An uncomplicated localized transverse colectomy was performed with surgical pathology revealing it to be a benign lipoma without malignant features (Figure 3). The patient recovered well and was discharged 4 days post-operation.

Discussion: Colonic lipomas are benign non-epithelial neoplasms, commonly found in the ascending colon. While most are asymptomatic and incidentally found, large lipomas can cause bleeding, obstruction, and in rare cases, intussusception. We present a unique case in which a massive lipoma grew to the point of colonic intussusception.  Although endoscopic biopsies are not typically diagnostic given the sub-mucosal aspect of the lesion, resections should be considered for larger lipomas to prevent complications in the future. 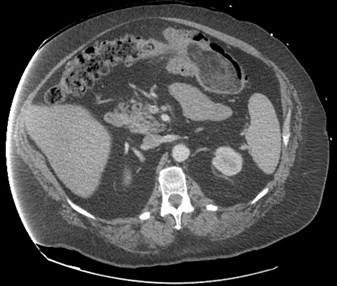 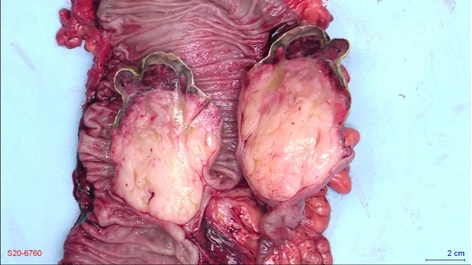