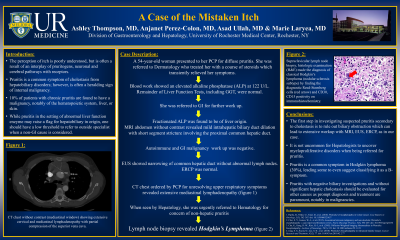 Introduction: Pruritus is a known symptom of cholestasis from hepatobiliary disorders, however, it is often feared to be heralding sign of internal malignancy. 10% of patients with pruritus are found to have a malignancy, notably of the liver, skin, and hematopoietic system. While pruritus in the setting of abnormal liver function tests can raise a red flag for hepatobiliary disease, there must be a low threshold to refer to outside specialists when a diagnostic work up is unrevealing.

Methods: We present here the case of a 54-year-old woman evaluated for diffuse pruritus. Her itch was only transiently responsive to a trial of steroid, and referral to GI was based on a mildly elevated alkaline phosphatase of 122 U/L. Fractionated ALP was of liver origin, while GGT and other liver enzymes and functions were all normal. Extensive GI work up for biliary disease included an MRI abdomen showing mild intrahepatic biliary duct dilation with stricture in the proximal common hepatic duct. EUS and ERCP were both normal; a prophylactic biliary stent was placed. Her pruritus was refractory to cholestyramine. While awaiting referral to Hepatology, a CT chest performed for complaints of upper respiratory symptoms found extensive mediastinal lymphadenopathy confirmed to be Hodgkin’s lymphoma on a subsequent lymph node biopsy. Treatment lead to remission of her lymphoma and eventual definitive resolution of her pruritus.

Discussion: The first step in investigating suspected pruritus secondary to cholestasis is to exclude biliary obstruction, which can lead to extensive work up with MRI, EUS and ERCP, as in our case. Pruritus is a frequent symptom in Hodgkin’s lymphoma (30%), leading some suggestions to even classify it as a B symptom. It is not uncommon for Hepatologists to uncover myeloproliferative disorders when being referred to for evaluation of pruritus. Patients with negative biliary investigations and without significant hepatic cholestasis should be evaluated for other causes promptly, as early diagnosis and treatment are paramount.