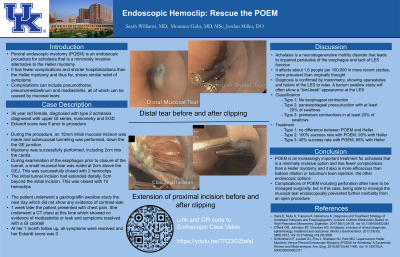 Introduction: Peroral endoscopic myotomy (POEM) is becoming a more commonly used procedure over the last several years. Compared to Heller myotomy, it leads to shorter hospitalizations, fewer complications, and so far, over a limited number of years, similar relief of symptoms. While it is less invasive overall, there are still several possible complications, including pneumothorax or pneumomediastinum, mediastinitis and mucosal tears can lead to both of these complications.

Methods: A 36 year old woman was diagnosed with type 2 achalasia and was symptomatic with an Eckardt score of 9. After evaluation in clinic and review of her workup including esophageal manometry, upper GI series and an EGD, the decision was made to proceed with POEM.
During the POEM procedure, a 15 mm mucosal initial incision was made at 23 cm from the incisors. The submucosal tunnel was extended down to the GE junction (GEJ) and 2 cm into the stomach. After tunneling, myotomy was successfully performed, including 2 cm into the cardia. After completion of the myotomy and during examination of the esophagus prior to closure of the tunnel, a small mucosal tear was noted at 2 cm above the GEJ. This was successfully closed using 2 hemoclips. At that time we noted that the mucosal incision had torn distally, 5 cm beyond the original incision site. Successful closure with 10 hemoclips was performed. The patient was kept NPO and a gastrografin swallow was performed next day that did not any evidence of contrast leak. Patient tolerated liquids with no symptoms and was discharged home.
After 1 week of discharge and prior to the follow-up visit patient presented to the ED with chest pain. She had no fevers or signs of infection. A CT chest with contrast was performed and was unremarkable with no evidence of leak or mediastinitis.
She was seen in clinic 3 weeks later where she reported complete resolution of her dysphagia and chest pain. Her Eckardt score was 0.

Discussion: POEM has become an important part of the treatment for achalasia and is a less invasive option than Heller myotomy. It also has greater efficacy and better outcomes than balloon dilation. However, procedure complications can be a major concern given possible need for surgical management. In this case, we were able to manage immediate complications of the procedure endoscopically with hemoclips. Hemoclips can be a successful tool for management of iatrogenic tears in the esophagus during endoscopic interventions.