P0967 (S1916). - Liposarcoma Associated with Fibrovascular Polyp of the Esophagus 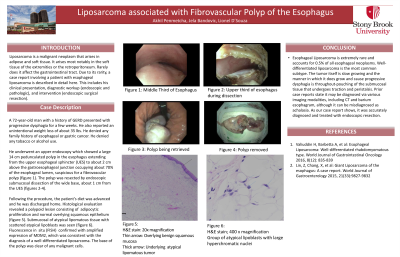 Introduction: Liposarcomas arise from adipocytes of soft tissue however usually in the body wall or extremities. Gastrointestinal involvement is rare.

Methods: 72-year-old man with a history of GERD presented with progressive dysphagia for a few weeks. He also reported an unintentional weight loss of about 35 lbs. He denied any family history of esophageal or gastric cancer. He denied any tobacco or alcohol use.
He underwent an upper endoscopy which showed a large 14 cm pedunculated polyp in the esophagus extending from the upper esophageal sphincter (UES) to about 2 cm above the gastroesophageal junction occupying about 70% of the esophageal lumen, suspicious for a fibrovascular polyp (figure 1). The polyp was resected by endoscopic submucosal dissection of the wide base, about 1 cm from the UES (figures 2,3).
Following the procedure, the patient’s diet was advanced and he was discharged home. Histological evaluation revealed a polypoid lesion with a core of fibrovascular connective tissue and normal overlying squamous epithelium. Small areas of atypical lipomatous tissue was seen with amplified expression of MDM2 which was consistent with the diagnosis of a well-differentiated liposarcoma. The base of the polyp was clear of any malignant cells.

Discussion: Fibrovascular polyps (FVP) are benign tumors of the esophagus usually composed of a combination of fibrous, vascular and adipose tissue. We present a case of an FVP with malignant progression of the adipose tissue within the polyp. While this is a very rare occurrence, the goal of endoscopic resection is to resect the polyp with an intact base for histological evaluation of the margin.