P1069 (S2018). - A MASSive Case of Herpes Esophagitis in an Immunocompetent Patient 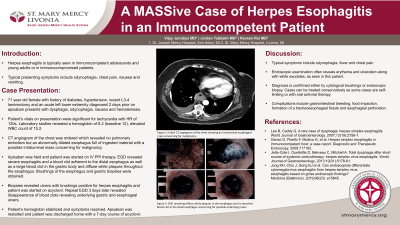 Methods: A 71 year old female with past medical history of diabetes, hypertension, recent L3-L4 laminectomy and an acute left lower extremity DVT diagnosed 2 days ago on apixaban presented with a 2 day history of dysphagia, odynophagia, chest pain, nausea and hematemesis. On presentation, vitals were significant for tachycardia with a heart rate in the 120s. Laboratory work was remarkable for a hemoglobin of 8.2, decreased from a baseline of 12 and an elevated WBC count of 15.2. CT angiogram of the chest which revealed no pulmonary embolism but an abnormally dilated esophagus full of ingested material with possible intraluminal mass concerning for possible malignancy. Patient's apixaban was held and she was started on IV proton pump inhibitor therapy. Patient underwent upper endoscopy the next day which revealed severe esophagitis, a 1 cm area with attached blood clot concerning for a potential mass and diffuse white plaques in the esophagus with a large adherent clot in the body of the stomach. Brushings were obtained along with biopsies of the gastric antrum and non-clotted area of the gastric body. Biopsies revealed ulcers and the brushings were positive for herpes esophagitis and she was started on acyclovir. Repeat EGD three days later demonstrated disappearance of the blood clots with underlying gastric and esophageal ulcers. Patient's hemoglobin remained stable and she was restarted on apixaban. After starting antiviral therapy the patient's symptoms greatly improved and she was discharged home with a 7 day course of acyclovir.

Discussion: Our case highlights an atypical patient population for herpes esophagitis as well as showcasing a unique presentation. Most cases of immunocompetent herpes esophagitis happen in adolescents or young adults. Typical symptoms include odynophagia, fever and chest pain. Endoscopic examination often reveals erythema and ulceration along with white exudates. Diagnosis is confirmed on cytological brushings or biopsy and can be treated with oral antiviral therapy, however some cases may be self-limiting. Complications include gastrointestinal bleeding, food impaction, tracheoesophageal fistula formation and esophageal perforation. 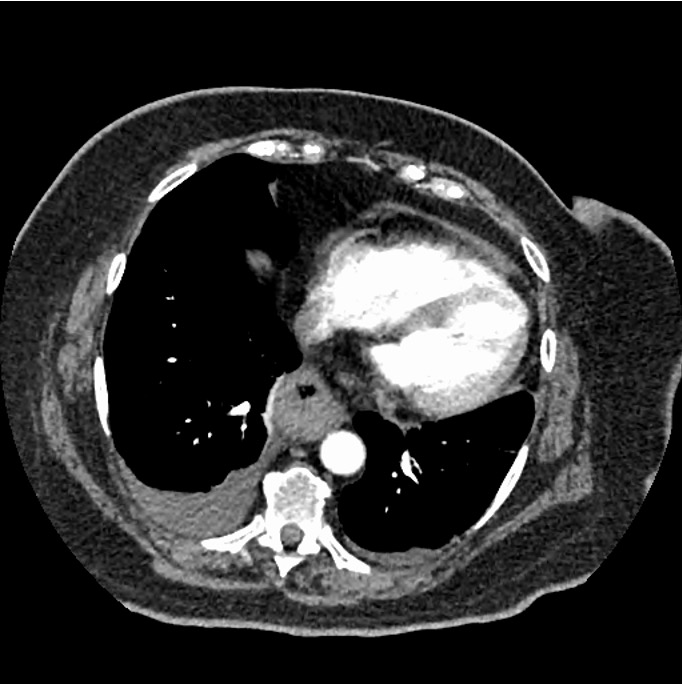 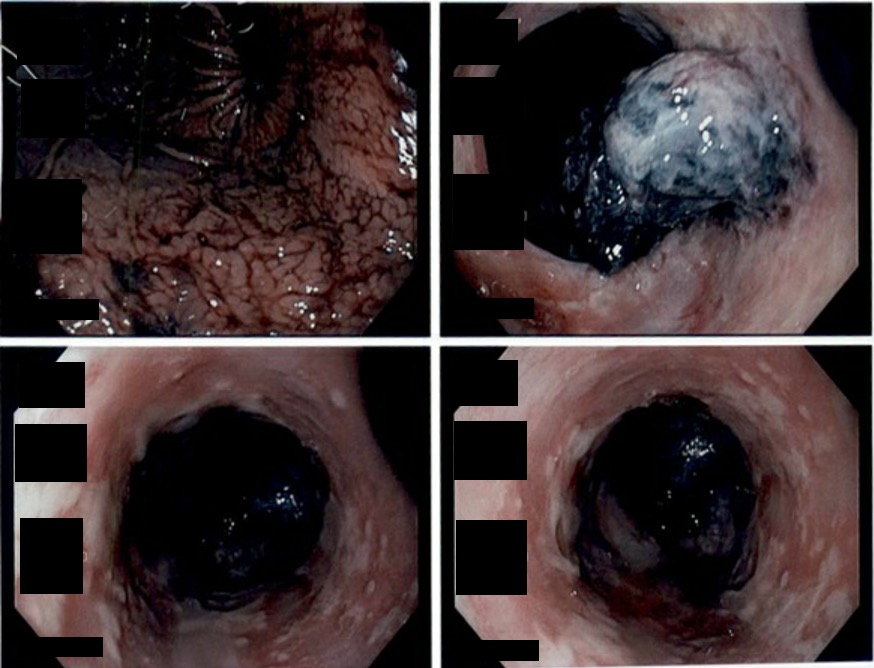