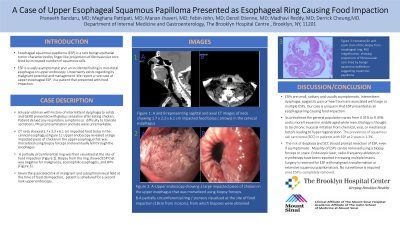 Introduction: Esophageal squamous papilloma (ESP) is a rare benign epithelial tumor characterized by finger like projections of fibrovascular core lined by increased number of squamous cells. ESP is usually asymptomatic and  an incidental finding in mid-distal esophagus on upper endoscopy. Uncertainty exists regarding its malignant potential and management. We report a rare case of upper esophageal ESP, in a patient that presented with food impaction.

Methods: 63-year-old man with history of intermittent dysphagia to solids and GERD presented with globus sensation after eating chicken. Patient denied any respiratory symptoms or  difficulty to tolerate secretions. Physical examination and labs were unremarkable. CT neck showed 1.7 x 2.3 x 6.1 cm impacted food bolus in the cervical esophagus [Figure 1]. Upper endoscopy revealed a large impacted piece of chicken in the upper esophagus that was morselized using biopsy forceps and eventually fell through the esophagus. A partially circumferential ring was then visualized at the site of food impaction [Figure 2]. Biopsy from the ring showed ESP that was negative for malignancy, eosinophilic esophagitis, and HPV [Figure 3]. Given the associated risk of malignant and suboptimal visual field at the time of food disimpaction,  patient is scheduled for a second look upper endoscopy.

Discussion: ESPs are small, solitary and usually asymptomatic. Intermittent dysphagia, epigastric pain or heart burn are associated with large or multiple ESPs. Our case is unique in that ESP presented as an esophageal ring causing food impaction. Its prevalence the general population varies from 0.01% to 0.45% and is more frequent in middle aged white men. Etiology is thought to be chronic mucosal irritation from chemical, viral, or mechanical factors leading to hyper regeneration. The prevalence of squamous cell carcinoma (SCC) in patients with ESP at 2 years is 1.3%. The risk of dysplasia and SCC should prompt resection of ESP, even if asymptomatic . Majority of ESPs can be removed using a biopsy forceps or snare. Endoscopic laser, radio-frequency ablation or cryotherapy have been reported in treating multiple lesions. Surgery is reserved for ESP with malignant transformation or extensive squamous papillomatosis. No surveillance is required once ESP is completely removed.

Figure 2:
A- Upper endoscopy showing a large impacted piece of chicken in the upper esophagus that was morselized using biopsy forceps.
B- A partially circumferential ring / stenosis visualized at the site of food impaction (18cm from incisors), from which biopsies were obtained 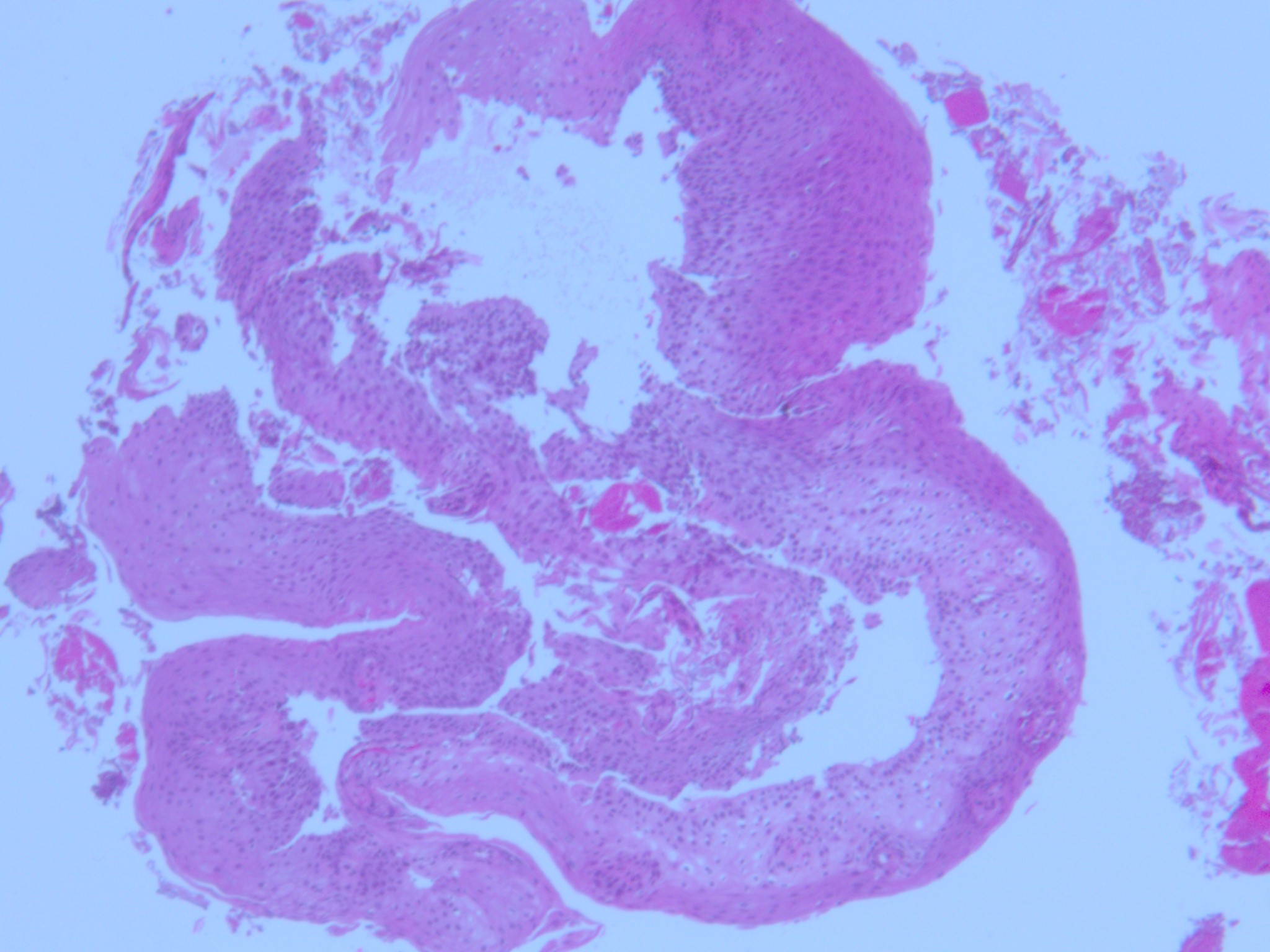