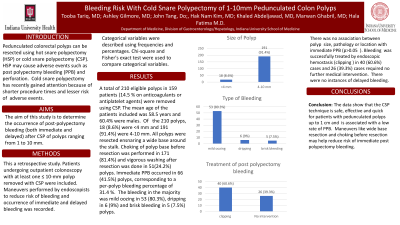 Methods: This a retrospective study. Patients undergoing outpatient colonoscopy with at least one ≤ 10-mm polyp removed with CSP were included. Maneuvers performed by endoscopists to reduce risk of bleeding and occurrence of immediate and delayed bleeding was recorded. Categorical variables were described using frequencies and percentages. Chi-square and Fisher's exact test were used to compare categorical variables.

Discussion: The data show that the CSP technique is safe, effective and quick for patients with pedunculated polyps up to 1 cm and  is associated with a low rate of PPB.  Maneuvers like wide base resection and choking before resection may help reduce risk of immediate post polypectomy bleeding.