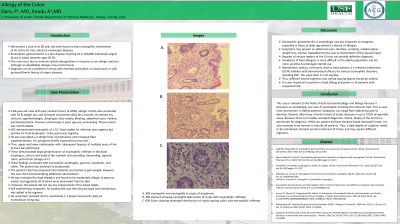 Eosinophilic gastroenteritis is a rare disease involving 10 in 100,000 individuals largely found in adults between ages 20-50. Often, patients present with a history of allergies. We present a case of an 80 year old male found to have eosinophilic involvement of his entire GI tract noted on endoscopic biopsies. This diagnosis was particularly challenging due to his age, difficulty to adhere to food allergen restrictions, and failure of multiple steroid regimens.

He was prescribed a multiple trials of prednisone and increased fiber supplementation. His symptoms briefly improved but recurred. Thus, upper and lower endoscopies with subsequent biopsies of multiple areas of the GI tract was performed. These demonstrated large predominance of eosinophilic infiltrate in the distal esophagus, antrum and body of the stomach and ascending, descending, sigmoid colon, and rectum. These findings correlated with eosinophilic esophagitis, gastritis, duodenitis, and colitis. The patient was switched to budesonide. The patient’s diarrhea improved intermittently and started to gain weight. However, this was short lived prompting additional interventions. He was evaluated for food allergens and found to be moderately allergic to peanuts, wheat, and egg white all of which were eliminated from his diet. However, the patient did not see any improvement of his bowel habits. Still experiencing symptoms, his budesonide was then discontinued and montelukast was added to his regimen. His symptoms resolved and he maintained 1-2 bowel movements daily.

Discussion:
Eosinophilic gastroenteritis is exceedingly rare but important to recognize, especially in those of older age without a history of allergies. Biopsies of various regions of the GI tract can provide definitive diagnosis. Avoidance of food allergens is more difficult in the elderly population and are more sensitive to prolonged steroid use. Thus, different steroid regimens and steroid sparing agents should be utilized. 40X eosinophils and neutrophils in crypts of duodenum