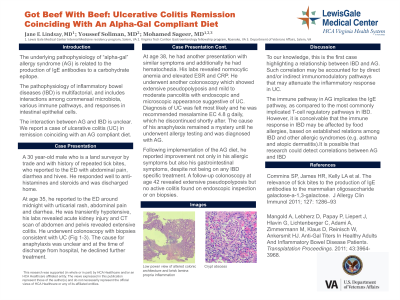 Introduction: The underlying pathophysiology of “alpha-gal” allergy syndrome (AG) is related to the production of IgE antibodies to a carbohydrate epitope. The pathophysiology of inflammatory bowel diseases (IBD) is multifactorial, and includes interactions among commensal microbiota, various immune pathways, and responses in intestinal epithelial cells.
The interaction between AG and IBD is unclear. We report a case of ulcerative colitis (UC) in remission coinciding with an AG compliant diet.

Methods: A 30 year-old male with a known history of tick bites reported to the ED with abdominal pain, diarrhea and urticaria. He responded well to anti-histamines and steroids, and was discharged home.
At age 35, he reported to the ED around midnight with urticarial and abdominal pain. He was transiently hypotensive. Labs revealed acute kidney injury. CT abdomen revealed extensive colitis. He underwent colonoscopy with biopsies consistent with UC (Fig 1-3). The cause for anaphylaxis was unclear and at the time of discharge from hospital, he declined further treatment.

At age 38, he had a recurrent presentation of symptoms and hematochezia. His labs revealed normocytic anemia, elevated ESR, and elevated CRP. He underwent colonoscopy which showed extensive pseudopolyposis and mild to moderate pancolitis with endoscopic and microscopic appearance suggestive of UC. Diagnosis of UC was felt most likely and he was recommended mesalamine EC 4.8 g daily, which declined. The cause of his anaphylaxis remained a mystery though so he underwent allergy testing and was diagnosed with AG.

Following implementation of the AG diet, he reported improvement not only in his allergic symptoms but also his gastrointestinal symptoms, despite not having received recommended treatment. A follow-up colonoscopy at age 42 revealed extensive pseudopolyposis but no active colitis.

Discussion: To our knowledge, this is the first case highlighting a relationship between IBD and AG. Such correlation may be accounted for by direct and/or indirect immunomodulatory pathways that may attenuate the inflammatory response in UC.
The immune pathway in AG implicates the IgE pathway, as compared to the most commonly implicated T-cell regulatory pathways in IBD. However, it is conceivable that the immune response in IBD may be affected by food allergies, based on established relations among IBD and other allergic syndromes (e.g. asthma and atopic dermatitis).It is possible that research could detect correlations between AG and IBD. 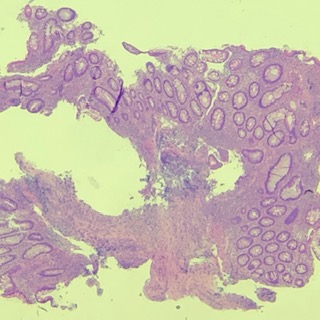 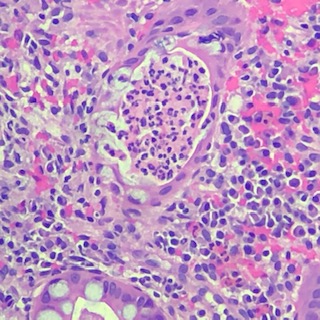