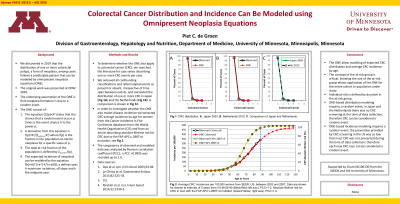 Introduction: We discovered that the distribution of one or more colorectal polyps, a form of neoplasia, among cases follows a predictable pattern that can be modeled by omnipresent neoplasia equations (ONE). The equation CE(p)=Xp states that the chance that a random event occurs p times is the event chance X to the power p. A derivative from this equation is f(p)=Xp/(Ʃp=0→∞Xp) where f(p) is the fraction in the population at-risk for neoplasia for a specific value of p.  The total at-risk fraction of the population is defined by Ʃp=0→∞f(p).

Methods: To determine whether the ONE also applies to colorectal cancer (CRC), we searched the literature for case series describing one or more CRC event per case. We removed all confounding classifications and reformulated events as present or absent, irrespective of time span between events. In order to investigate whether the ONE also models disease incidence we extracted CRC average incidence by age for women from the Cancer Incidence in Five Continents databases from the World Health Organization (CI5). The congruency of observed and modeled data was analyzed by Pearson correlation coefficient (PCC);  a PCC >0.9995 was rounded up to 1.0.

Results: Two studies were identified that allowed extraction of numeric data. A 2003 study from Japan reported 924 CRCs in 876 cases, and a 2015 study from the Netherlands reported 5357 CRCs in 5157 cases. The ONE modeled the data with near perfect accuracy; the PCCs for both models was 1.0 (Fig 1A). Based on the data from the Netherlands, we estimated that 50% of the at-risk population actually develops CRC. To model incidence we made two assumptions: first, CRC incidence by age will fit a logistic pattern and thus we postulated three population groups: all without CRC risk, transition into at-risk for CRC, and all in at-risk for CRC groups. Second, mortality prevents that the population reaches the all at-risk stage for CRC. Based on these assumptions the ONE modeled the data with near perfect accuracy; the PCC was 1.0 (Fig 1B). Lastly, we applied the ONE to late-onset familial adenomatous polyposis related CRC; the congruency of observed data and model was perfect, PCC was 1.0.

Discussion: The ONE allow modeling of expected CRC distribution and average CRC incidence by age. The concept of the at-risk group is critical: knowing the size of the at-risk group allows application of the ONE for the entire cohort or population under study. Individual risk is defined by at-risk duration. 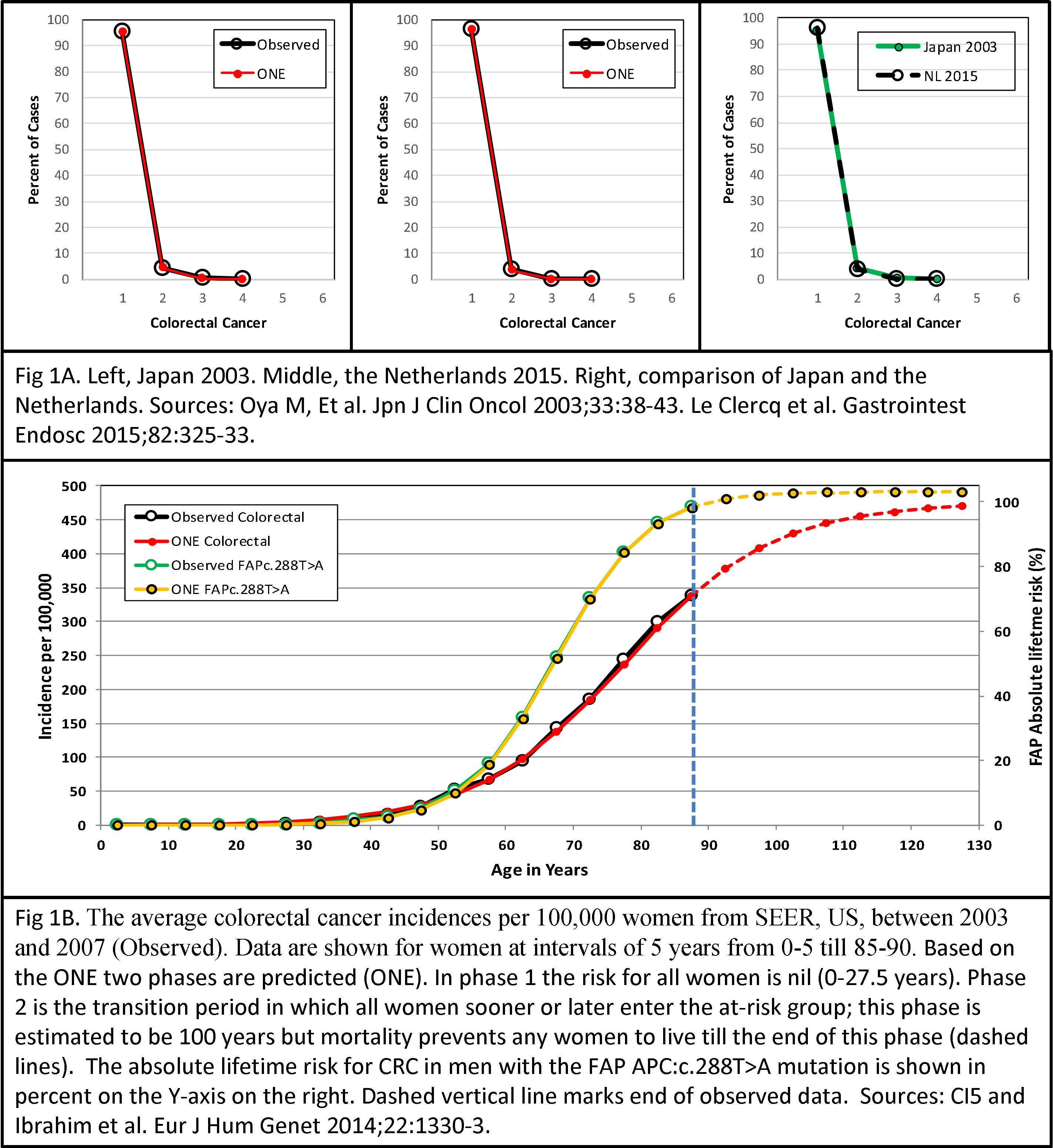