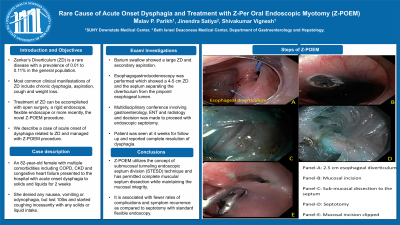 Introduction: Zenker's Diverticulum (ZD) is a rare disease with a prevalence of 0.01 to 0.11% in the general population.It is commonly associated with symptoms of progressive and chronic symptoms of dysphagia and weight loss. We describe a rare case of acute onset of dysphagia related to ZD and its management with a novel endoscopic technique

Methods: An 82-year-old female with multiple co-morbidities presented to the hospital with acute onset dysphagia to solids and liquids since last 2 weeks. She lost 10 lbs and started coughing incessantly with any solids or liquid intake. Vital signs and routine laboratory values were within normal limits. On examination by speech and language pathologist, she was noted to have severe oropharyngeal dysphagia and frank aspiration with all consistencies. A modified barium swallow showed a large ZD and aspiration. Neurology consultation was sought given acuity of dysphagia, however there were no local neurological deficits on imaging and physical exam.

Subsequently an Esophagogastroduodenoscopy (EGD) was performed which showed a 4-5 cm ZD and the septum separating the diverticulum from the pinpoint esophageal lumen. The case was discussed at a multidisciplinary conference involving gastroenterology, ENT and radiology and decision was made to proceed with endoscopic septotomy. A Z-peroral endoscopic myotomy (POEM) was performed with septotomy. It was technically challenging to expose the anterior aspect of the septum secondary to significant fibrosis and difficulty with dissection. Therefore a partial septotomy was performed extending to about 2 cm distally at the posterior aspect of the septum. The scope was withdrawn and reintroduced into the true esophageal lumen more easily despite the anterior aspect of the septum not being completely dissected. Patient was started on clear liquid diet after 48 hours with gradual advancement and tolerated it well. On a 4-week follow up visit, patient continued to tolerate diet well with weight gain and no signs of aspiration.

Discussion: Treatment of ZD can be accomplished with open surgery, a rigid endoscope, flexible endoscope or more recently, the novel Z-POEM procedure.

Z-POEM utilizes the concept of submucosal tunneling endoscopic septum division (STESD) technique and has permitted complete muscular septum dissection while maintaining the mucosal integrity. It is associated with fewer rates of complications and symptom recurrence as compared to septotomy with standard flexible endoscopy. 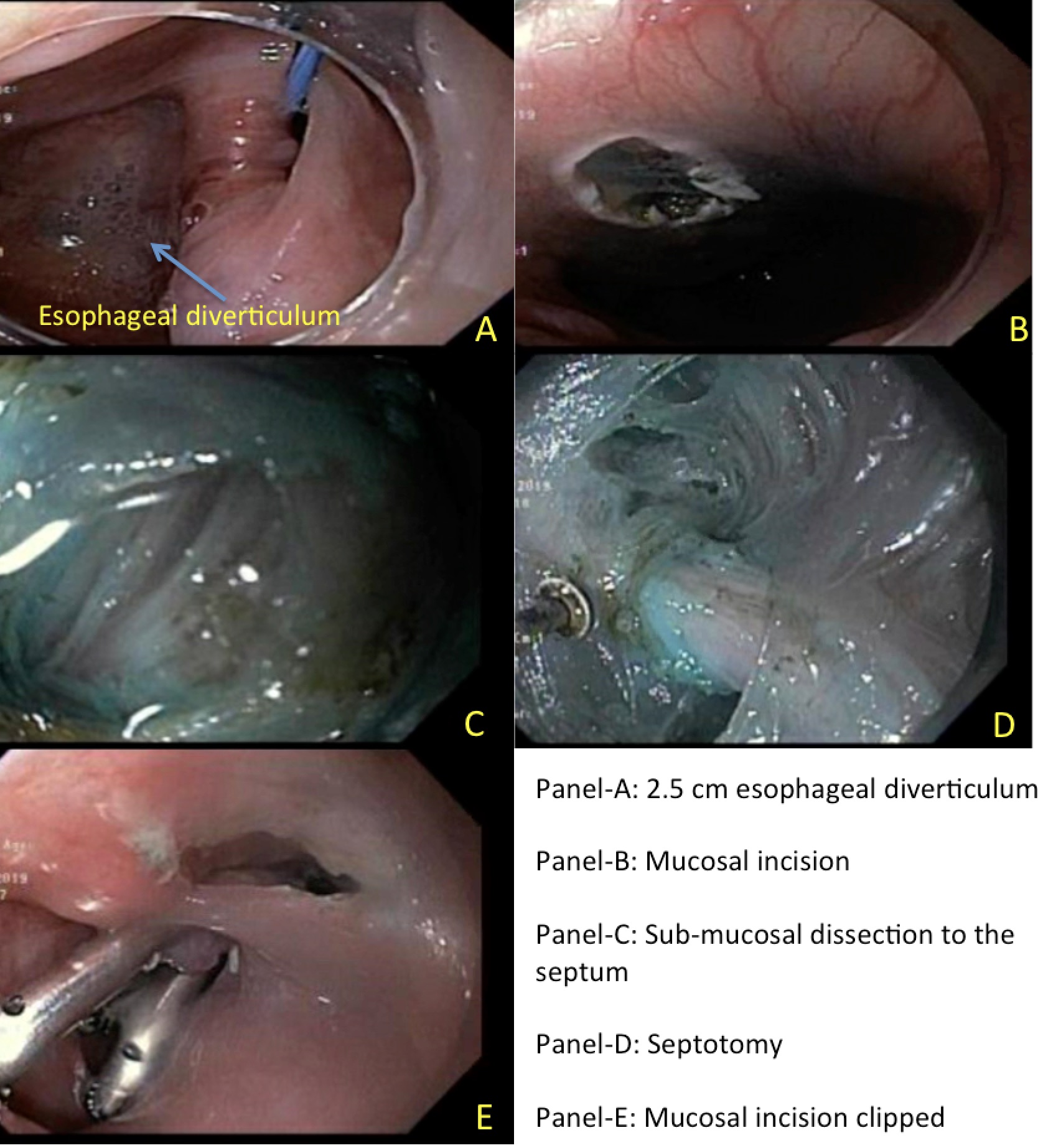