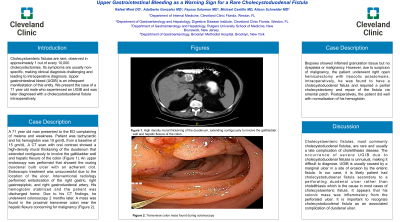 Introduction: Cholecystoenteric fistulas are rare, observed in approximately 1 out of every 10,000 cholecystectomies. Its symptoms are usually non-specific, making clinical diagnosis challenging and leading to intraoperative diagnosis. Upper gastrointestinal bleed (UGIB) is an infrequent manifestation of this entity. We present the case of a 71 year old male who experienced an UGIB and was later diagnosed with a cholecystoduodenal fistula intraoperatively.

Methods: A 71 year old man presented to the ED complaining of melena and weakness. Patient was tachycardic and his hemoglobin was 10 gm/dL from a baseline of 15 gm/dL. A CT scan with oral contrast showed a high-density mural thickening of the duodenum that extended contiguously to involve the gallbladder wall and hepatic flexure of the colon (Figure 1). An upper endoscopy was performed that showed the oozing duodenal bulb ulcer with an adherent clot. Endoscopic treatment was unsuccessful due to the location of the ulcer. Interventional radiology performed embolization of the right gastric, right gastroepiploic, and right gastroduodenal artery. His hemoglobin stabilized and the patient was discharged home. Due to his CT findings, he underwent colonoscopy 2 months later. A mass was found in the proximal transverse colon near the hepatic flexure concerning for malignancy (Figure 2). Biopsies showed inflamed granulation tissue but no dysplasia or malignancy. However, due to suspicion of malignancy, the patient underwent right open hemicolectomy with ileocolic anastomosis. Intraoperatively, he was found to have a cholecystoduodenal fistula and required a partial cholecystectomy and repair of the fistula via omental patch. Postoperatively, the patient did well with normalization of his hemoglobin. 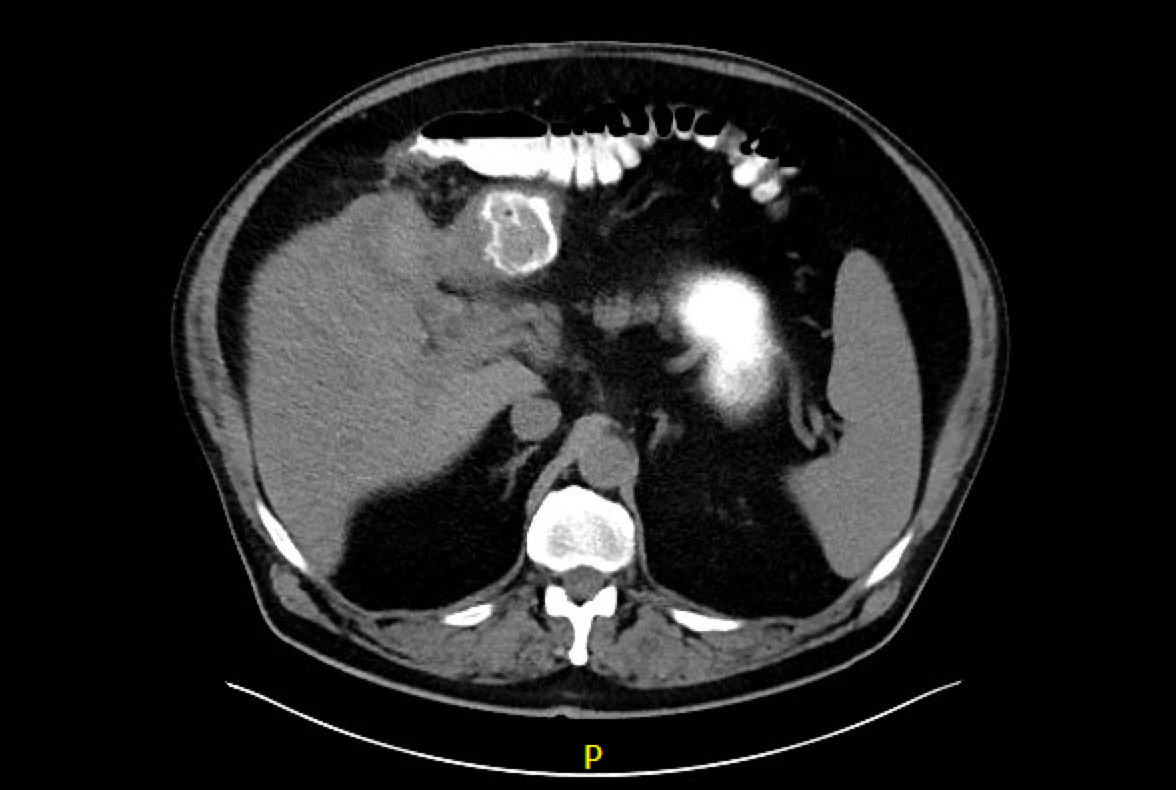 Figure 1. High density mural thickening of the duodenum, extending contiguously to involve the gallbladder wall and hepatic flexure of the colon.