P0582 (S1704). - Mantle Cell Lymphoma Presenting as Colonic Polypoid Nodules in a Crohn’s Disease Patient With History of Azathioprine Use 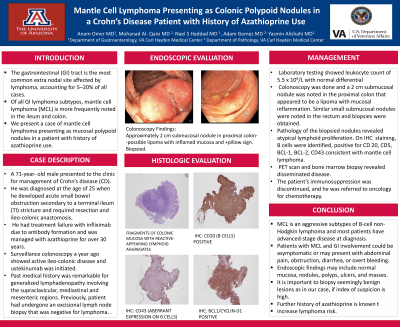 Introduction: The gastrointestinal (GI) tract is the most common extra nodal site affected by lymphoma, accounting for 5–20% of all cases. Of all GI lymphoma subtypes, mantle cell lymphoma (MCL) is more frequently noted in the ileum and colon. We present a case of MCL presenting as mucosal polypoid nodules in a Crohn's disease patient with history of azathioprine use.

Methods: A 71-year- old male presented to the clinic for management of Crohn’s disease (CD). He was diagnosed at the age of 25 when he developed acute small bowel obstruction secondary to a terminal ileum (TI) stricture and required resection and ileo-colonic anastomosis. He had treatment failure with infliximab due to antibody formation and was managed with azathioprine for over 30 years. Surveillance colonoscopy a year ago showed active ileo-colonic disease and ustekinumab was initiated. Past medical history was remarkable for generalized lymphadenopathy involving the supraclavicular, mediastinal and mesenteric regions. Previously, patient had undergone an excisional lymph node biopsy that was negative for lymphoma. Laboratory testing showed leukocyte count of 5.5 x 109/L with normal differential, hemoglobin of 14.1 g/dL, and a platelet count of 106 L K/uL. Colonoscopy showed scattered erosions and friable mucosa in the entire examined colon and TI. Interestingly, a 2 cm submucosal nodule was noted in the proximal colon that appeared to be a lipoma with mucosal inflammation. Similar small submucosal nodules were noted in the rectum and biopsies were obtained. Pathology of the biopsied nodules revealed atypical lymphoid proliferation. On immunohistochemical staining, B cells were identified, positive for CD 20, CD5, BCL-1, BCL-2, CD43 but negative for CD10 and CD23. The findings were consistent with mantle cell lymphoma. PET scan and bone marrow biopsy revealed disseminated disease with bone marrow involvement. The patient’s immunosuppression was discontinued, and he was referred to oncology for chemotherapy.

Discussion: MCL is an aggressive subtypes of B-cell non-Hodgkin lymphoma and most patients have advanced-stage disease at diagnosis. Patients with MCL and GI involvement could be asymptomatic or may present with abdominal pain, obstruction, diarrhea, or overt bleeding. Endoscopic findings may include normal mucosa, nodules, polyps, ulcers, and masses. It is important to biopsy seemingly benign lesions as in our case, if index of suspicion is high. Further history of azathioprine is known to increase lymphoma risk. 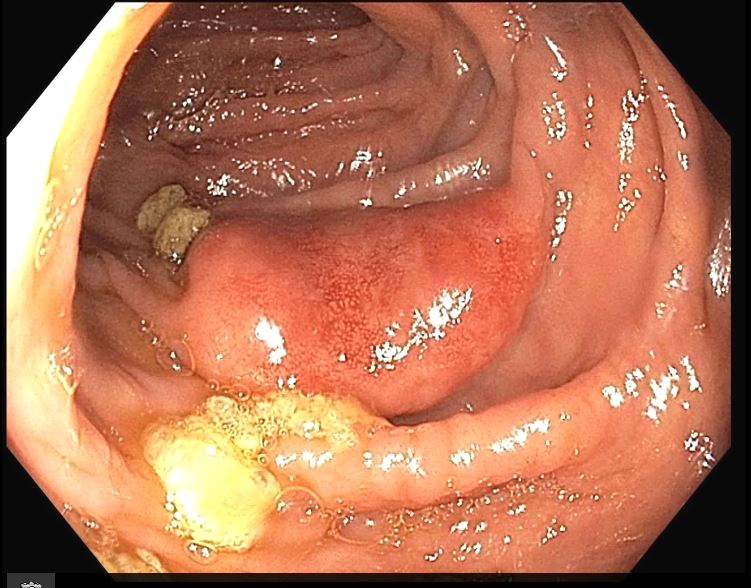