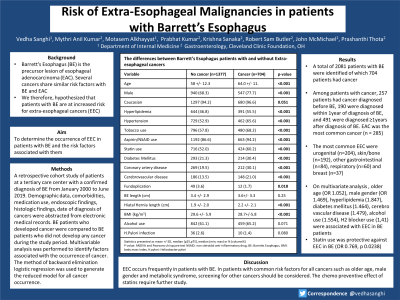 Methods: This is a retrospective cohort study of patients at a tertiary care center with a confirmed diagnosis of BE from January 2000 to June 2019. Demographic data, comorbidities, medication use, endoscopic findings, histologic findings, date of diagnosis of cancers were abstracted from electronic medical records. BE patients who developed cancer were compared to BE patients who did not develop any cancer during the study period. Multivariable analysis was performed to identify factors associated with the occurrence of cancer. Race, aspirin/non-steroidal anti-inflammatory drug use, hiatal hernia, and body mass index highly correlated with other variables and were not used in the multivariable analysis. The method of backward elimination logistic regression was used to generate the reduced model for all cancer occurrence.

Results: A total of 2081 patients with BE were identified of which 704 patients had cancer. Among patients with cancer, 257 patients had cancer diagnosed before BE, 190 were diagnosed within 1year of diagnosis of BE, and 491 were diagnosed ≥1years after diagnosis of BE. EAC was the most common cancer (n = 285). The most common EEC were urogenital (n=204), skin/bone (n=192), other gastrointestinal (n=84), respiratory (n=60) and breast (n=37). The differences between BE patients with EEC and without are presented in table 1. On multivariate analysis (table 2), older age, male gender, hyperlipidemia, diabetes, cerebrovascular disease, alcohol use, H2 blocker use were associated with EEC in BE patients. Statin use was protective against EEC in BE.

Discussion: EEC occurs frequently in patients with BE. In patients with common risk factors  for all cancers such as older age, male gender and  metabolic syndrome, screening for other cancers should be considered. The chemopreventive effect of statins require further study. 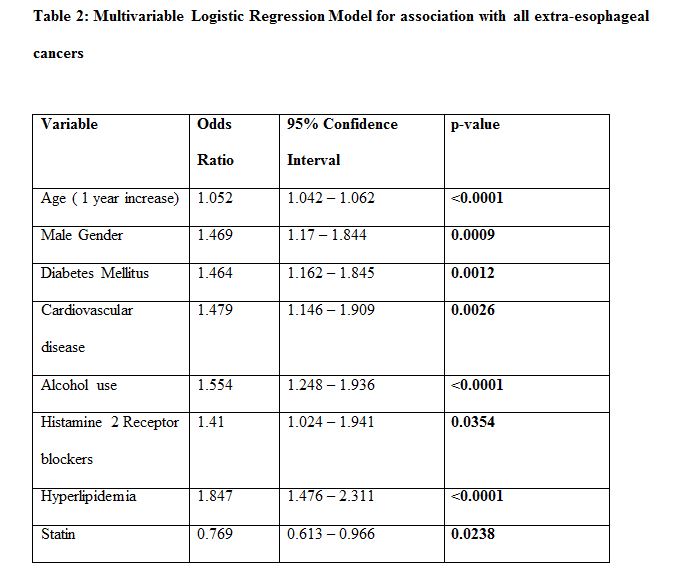