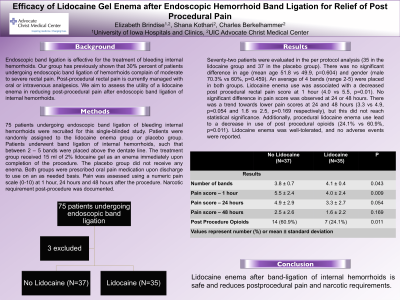 Methods: 75 patients undergoing endoscopic band ligation of bleeding internal hemorrhoids were recruited for this single-blinded study.  Patients were randomly assigned to the lidocaine enema group or placebo group. Patients underwent band ligation of internal hemorrhoids, such that between 2 – 5 bands were placed above the dentate line.  The treatment group received 15 ml of lidocaine gel as an enema immediately upon completion of the procedure. The placebo group did not receive any enema.  Both groups were prescribed oral pain medication upon discharge to use on an as needed basis. Pain was assessed using a numeric pain scale (0-10) at 1 hour, 24 hours and 48 hours after the procedure. Narcotic requirement post-procedure was documented.