P1035 (S1984). - A Rare Case of a Giant Esophageal Leiomyoma Causing Abdominal Pain in the Absence of Dysphagia 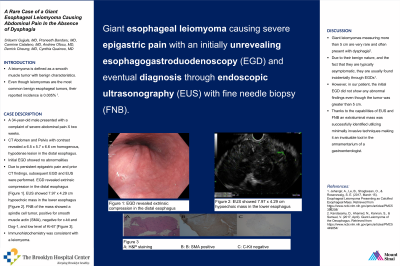 A leiomyoma is defined as a smooth muscle tumor with benign characteristics. Even though leiomyomas are the most common benign esophageal tumors, their reported incidence is 0.005%1. Here, we present a rare case of a giant esophageal leiomyoma that is greater than 5 cm causing severe epigastric pain with an initially unrevealing esophagogastroduodenoscopy (EGD) and eventual diagnosis through endoscopic ultrasonography (EUS) with fine needle biopsy (FNB).

A 34-year-old male presented to the emergency department with a complaint of severe abdominal pain for the past two weeks. He denied dysphagia, odynophagia, or any family history of malignancies. He endorsed an eight-pack year history of tobacco use. Vital signs and labs were unremarkable. CT Abdomen and Pelvis with contrast done at outside facility revealed a 6.5 x 5.7 x 6.6 cm homogenous, hypodense lesion in the distal esophagus. Initial EGD showed no abnormalities. Due to persistent epigastric pain and prior CT findings, subsequent EGD and EUS were performed. EGD revealed extrinsic compression in the distal esophagus [Figure 1]. EUS showed 7.97 x 4.29 cm hypoechoic mass in the lower esophagus [Figure 2]. FNB of the mass showed a spindle cell tumor, positive for smooth muscle actin (SMA), negative for c-kit and Dog-1, and low level of Ki-67 [Figure 3]. Immunohistochemistry was consistent with a leiomyoma. Patient was referred to Surgery for further management.

Discussion: Leiomyomas are rare, benign tumors of the esophagus that remain asymptomatic in more than 50% of cases2. Leiomyomas tend to grow slowly and usually range in size from 2 – 5 cm2. Giant leiomyomas measuring more than 5 cm are very rare and often present with dysphagia2. Due to their benign nature, and the fact that they are typically asymptomatic, they are usually found incidentally through EGDs1. However, in our patient, the initial EGD did not show any abnormal findings even though the tumor was greater than 5 cm. Thanks to the capabilities of EUS and FNB an extraluminal mass was successfully identified utilizing minimally invasive techniques making it an invaluable tool in the armamentarium of a gastroenterologist. 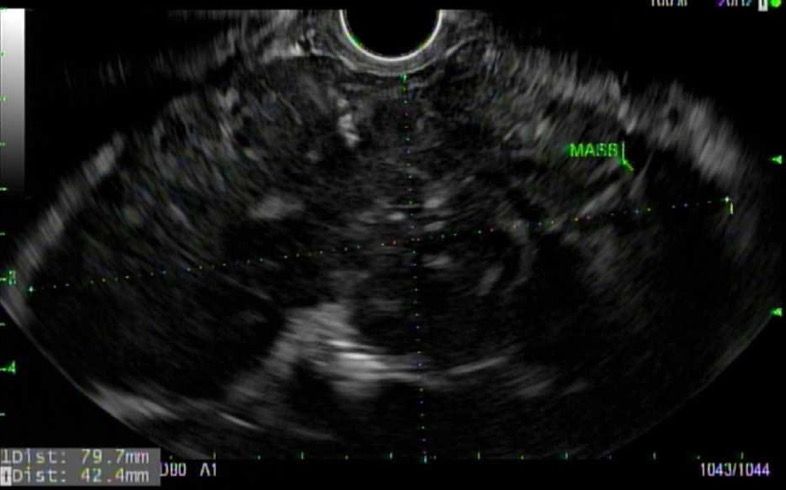