P0246 (S1490). - The Unknown Blooming From the Known: Recurrent Pancreatitis Due to Mononucleosis 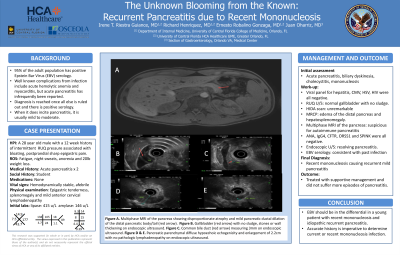 Introduction: Epstein Bar Virus (EBV) is a benign infection and positive serology is seen in 95% of the adult population. Complications range from acute hemolytic anemia to myocarditis, however, pancreatitis occurs in less than one in one thousand cases. Acute pancreatitis has been causally linked to viruses, but, only few cases have reported EBV as the inciting infection. Diagnosis of EBV pancreatitis is reached once all other causes have been ruled out and there is a positive EBV serology. Treatment is supportive and prognosis is excellent as it causes mild to moderate pancreatitis.

Methods: A 28 year old healthy male presented with a 12 week history of intermittent pressure in the left upper quadrant associated with bloating and sharp epigastric pain after eating. He endorsed fatigue, night sweats and anorexia with 10lb weight loss when symptoms started. He denied any alcohol, tobacco or illicit drug use and did not endorse a family history of pancreatitis nor underlying medication or supplement use. Physical exam showed epigastric tenderness, splenomegaly and mild anterior cervical lymphadenopathy. Laboratory data revealed a lipase of 415 u/L, amylase 146 u/L and thrombocytopenia but otherwise unremarkable including triglycerides. Viral panel for hepatitis, CMV, HSV, HIV were negative. Right upper quadrant ultrasound and HIDA scan were normal. MRCP revealed edema of the distal pancreas and hepatosplenomegaly. Multiphase MRI of the pancreas was suspicious for autoimmune pancreatitis, however, ANA, IgG4, CFTR, CTRC, ORSS1 and SPINK1 were negative. Endoscopic ultrasound showed resolving pancreatitis. Serology for EBV was consistent with a recent past infection. Patient was diagnosed with recent mononucleosis causing recurrent mild pancreatitis given his initial symptoms and splenomegaly. Patient was treated with supportive management and did not suffer more episodes of pancreatitis.

Discussion: Pancreatitis due to EBV should be in the differential in a young patient with recent mononucleosis and idiopathic recurrent pancreatitis. Recent literature review found less than twenty cases of acute EBV causing acute pancreatitis. In contrast, our patient presented late to the hospital after multiple bouts of mild pancreatitis and no longer had an acute EBV infection making quick diagnosis difficult. It is imperative to obtain an accurate history in a young patient with no obvious causes of pancreatitis in order to determine current or recent mononucleosis infection as the underlying cause. 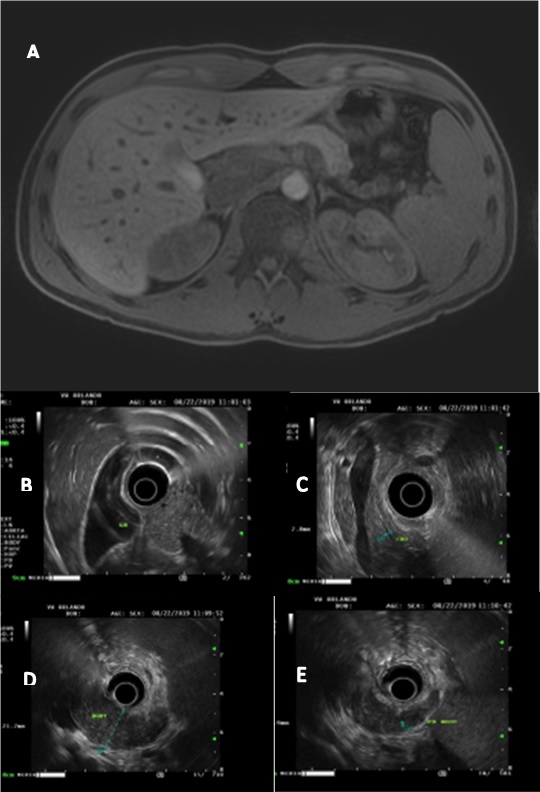