P0379 (S0160). - Temporal Trends in Prevalence and Outcomes of Colorectal Cancer in Hospitalized Patients Based on Race, Insurance Status, and Income Quartile 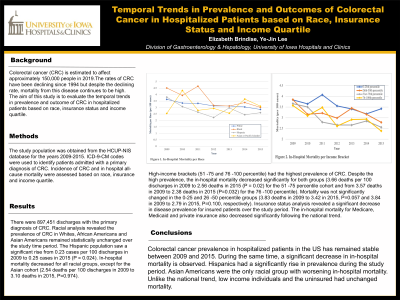 Introduction: Colorectal cancer (CRC) is estimated to affect approximately 150,000 people in 2019.The rates of CRC have been declining since 1994 but despite the declining rate, mortality from this disease continues to be high. The aim of this study is to evaluate the temporal trends in prevalence and outcome of CRC in hospitalized patients based on race, insurance status and income quartile.

Methods: The study population was obtained from the HCUP-NIS database for the years 2009-2015. ICD-9-CM codes were used to identify patients admitted with a primary diagnosis of CRC. Incidence of CRC and in hospital all-cause mortality were assessed based on race, insurance and income quartile.

Results: There were 897,451 discharges with the primary diagnosis of CRC. Racial analysis revealed the prevalence of CRC in Whites, African Americans and Asian Americans remained statistically unchanged over the study time period. The Hispanic population saw a significant rise from 0.23 cases per 100 discharges in 2009 to 0.25 cases in 2015 (P = 0.024). In-hospital mortality decreased for all racial groups, except for the Asian cohort (2.54 deaths per 100 discharges in 2009 to 3.10 deaths in 2015, P=0.974).

Discussion: Colorectal cancer prevalence in hospitalized patients in the US has remained stable between 2009 and 2015. During the same time, a significant decrease in in-hospital mortality is observed. Hispanics had a significantly rise in prevalence during the study period. Asian Americans were the only racial group with worsening in-hospital mortality. Unlike the national trend, low income individuals and the uninsured had unchanged mortality.