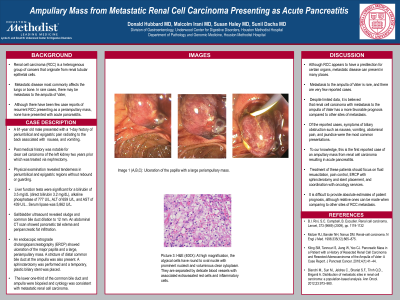 Introduction: Renal cell carcinoma (RCC) is a heterogenous group of cancers that originate from renal tubular epithelial cells. Metastatic disease most commonly affects the lungs or bone. In rare cases, there may be metastasis to the ampulla of Vater, which can result in acute pancreatitis. Although there have been few case reports of recurrent RCC presenting as a periampullary mass, none have presented with acute pancreatitis.

Methods: A 61-year old male presented with a 1-day history of periumbilical and epigastric pain radiating to the back, nausea, and vomiting. Past medical history was notable for clear cell carcinoma of the left kidney with pulmonary metastasis. Physical examination revealed tenderness in periumbilical and epigastric regions without rebound or guarding. Liver function tests were significant for a bilirubin of 3.2 mg/dL, alkaline phosphatase of 777 U/L, and an ALT of 659 U/L. Serum lipase was 5,862 U/L.
Gallbladder ultrasound revealed sludge and common bile duct dilation to 12 mm. An abdominal CT scan showed pancreatic tail edema and peripancreatic fat infiltration. Endoscopic retrograde cholangiopancreatography (ERCP) showed ulceration of the major papilla and a large, periampullary mass. A stricture of distal common bile duct at the ampulla was also present. A sphincterotomy was performed and a temporary, plastic biliary stent was placed. The lower one-third of the common bile duct and ampulla were biopsied and cytology was consistent with metastatic renal cell carcinoma.

Discussion: Although RCC appears to have a predilection for certain organs, metastatic disease can present in many places. Metastasis to the ampulla of Vater is rare, and there are very few reported cases. Despite limited data, it is believed that renal cell carcinoma with metastasis to the ampulla of Vater has a more favorable prognosis compared to other sites.
Of the reported cases, symptoms of biliary obstruction such as nausea, vomiting, abdominal pain, and jaundice were the most common presentations. To our knowledge, this is the first reported case of an ampullary mass from renal cell carcinoma resulting in acute pancreatitis. Treatment of these patients should focus on fluid resuscitation and pain control, ERCP with sphincterotomy and stent placement, and coordination with oncology services.  It is difficult to provide absolute estimates of patient prognosis, although relative ones can be made when comparing to other sites of RCC metastasis. 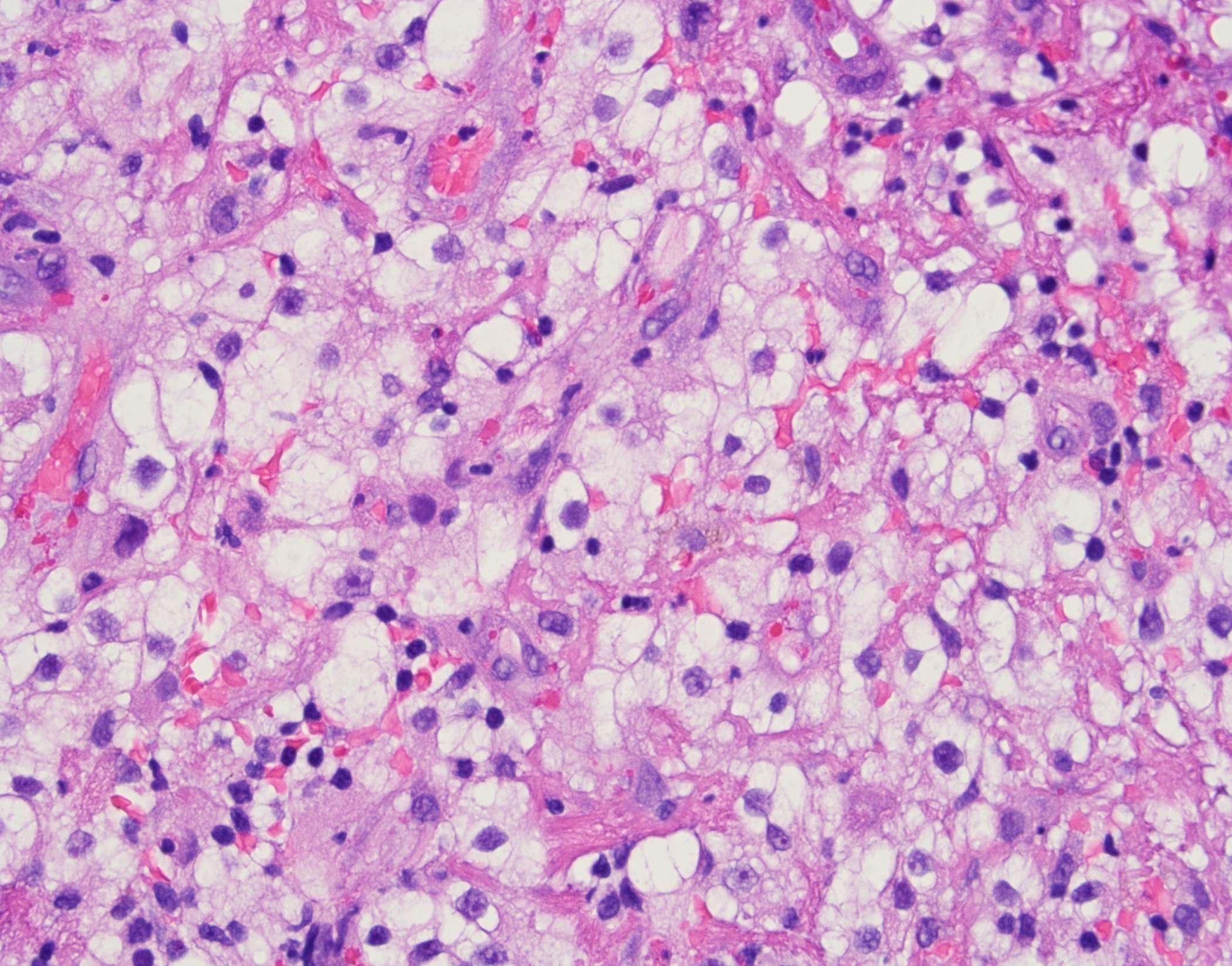 H&E (400X): At high magnification, the atypical cells have round to oval nuclei with prominent nucleoli and voluminous clear cytoplasm. They are separated by delicate blood vessels with associated extravasated red cells and inflammatory cells.