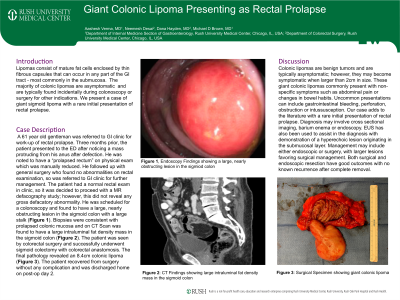 Introduction: Lipomas consist of mature fat cells enclosed by thin fibrous capsules that can occur in any part of the GI tract - most commonly in the submucosa. The majority of colonic lipomas are asymptomatic and are typically found incidentally during colonoscopy or surgery for other indications. We present a case of giant sigmoid lipoma with a rare initial presentation of rectal prolapse.

Methods: A 61 year old gentleman was referred to GI clinic for work-up of rectal prolapse. Three months prior, the patient presented to the ED after noticing a mass protruding from his anus after defection. He was noted to have a “prolapsed rectum” on physical exam which was manually reduced. He followed up with general surgery who found no abnormalities on rectal examination, so was referred to GI clinic for further management. The patient had a normal rectal exam in clinic, so it was decided to proceed with a MR defacography study; however, this did not reveal any gross defacatory abnormality. He was scheduled for a colonoscopy and found to have a large, nearly obstructing lesion in the sigmoid colon with a large stalk (Figure 1). Biopsies were consistent with prolapsed colonic mucosa and on CT Scan was found to have a large intraluminal fat density mass in the sigmoid colon (Figure 2). The patient was seen by colorectal surgery and successfully underwent sigmoid colectomy with colorectal anastomosis. The final pathology revealed an 8.4cm colonic lipoma (Figure 3). The patient recovered from surgery without any complication and was discharged home on post-op day 2.

Discussion: Colonic lipomas are benign tumors and are typically asymptomatic; however, they may become symptomatic when larger than 2cm in size. These giant colonic lipomas commonly present with non-specific symptoms such as abdominal pain or changes in bowel habits. Uncommon presentations can include gastrointestinal bleeding, perforation, obstruction or intussusception. Our case adds to the literature with a rare initial presentation of rectal prolapse. Diagnosis may involve cross sectional imaging, barium enema or endoscopy. EUS has also been used to assist in the diagnosis with demonstration of a hyperechoic lesion originating in the submucosal layer. Management may include either endoscopic or surgery with larger lesions favoring surgical management. Both surgical and endoscopic resection have good outcomes with no known recurrence after complete removal. 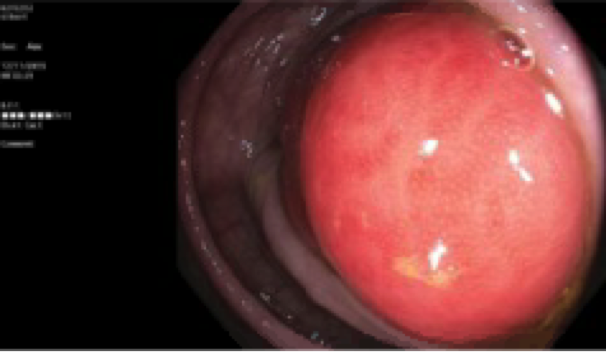