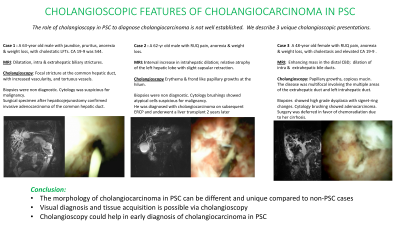 Introduction: Early detection of CCA in PSC is challenging. Digital cholangioscopy has been used for visual diagnosis in patients without PSC, but it is unclear if the same could apply in patients with PSC.

Methods: We describe 3 cases of CCA in PSC.

The first case is a 63-year old Caucasian male with a 5-year history of PSC with co-existing ulcerative colitis. Cholangioscopy showed  chronic inflammation and a focal circumferential stricture at the common hepatic duct, with increased vascularity, and tortuous vessels. Biopsies were non diagnostic, but cytology brushings were suspicious for malignancy. He underwent a resection with hepaticojejunostomy, and surgical pathology confirmed invasive adenocarcinoma of the common hepatic duct and cystic stump with perineural invasion but without lymphovascular invasion.
The 2nd case is a 62-yr old Caucasian male with 1-year history of PSC with co-existing ulcerative colitis. Cholangioscopy showed severe erythema, exudates and friability, and  frond like growths at the hilum which were biopsied. Cytology brushings showed atypical cells suspicious for malignancy, and biopsies showed benign biliary duct epithelium with granulation tissue. He was eventually diagnosed with cholangiocarcinoma, started on chemoradiation prior to a liver transplant 2 years later.
The final case is a 48-year old Hispanic female with a 7-year history of PSC with co-existing ulcerative colitis. On cholangioscopy, there were papillary growths in the distal CBD with mucin in the lumen; the uninvolved portions of the ducts show mucosal scarring consistent. Copious mucin is seen within a dilated duct. The disease was multifocal involving the areas of the extrahepatic duct and left intrahepatic duct. Histopathology showed high grade dysplasia with signet-ring changes. Cytology brushing showed adenocarcinoma. Surgery was deferred in favor of chemoradiation due to her cirrhosis.

Discussion: In summary, we describe 3 unique presentations of CCA in PSC. All tumors were located within the reach of a cholangioscope, with different morphologies. CCA was noted to complicate both active PSC and quiescent disease. We propose that early cholangioscopy in these cases may help establish a diagnosis of CCA early, thereby leading to better outcomes, similar to CCA in non-PSC patients.