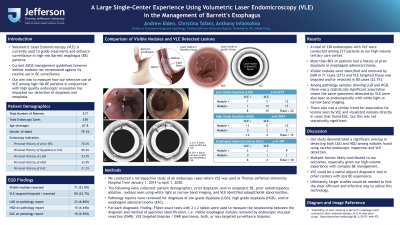 Introduction: Volumetric Laser Endomicroscopy (VLE) is currently used to guide treatments and enhance surveillance in high-risk Barrett esophagus (BE) patients. Current ASGE management guidelines however neither endorse nor recommend against its routine use in BE surveillance. The aim of our study was to measure how our selective use of VLE among high risk BE patients in conjunction with high quality endoscopic evaluation has impacted our detection of dysplasia and neoplasia.

Methods: We conducted a retrospective study of all endoscopy cases where VLE was used at Thomas Jefferson University Hospital from January 1, 2014 to April 1, 2020. All of the following were included: patient demographics, prior history of dysplastic and/or neoplastic BE, prior radiofrequency ablation, nodules seen using white light or narrow band imaging, and VLE identified subepithelial abnormalities. All corresponding pathology reports were reviewed for diagnoses of low grade dysplasia (LGD), high grade dysplasia (HGD), and/or esophageal adenocarcinoma (EAC). For each diagnostic finding, Fisher exact tests with 2 x 2 tables were used to measure the relationship between the diagnosis and method of specimen identification, i.e. esophageal nodules removed by endoscopic mucosal resection (EMR), VLE targeted biopsies / EMR specimens, or both.

Results: A total of 338 endoscopies with VLE were conducted among 217 patients at our high-volume tertiary care center. More than 86% of patients had a history of prior dysplasia or esophageal adenocarcinoma. Nodules were identified and removed by EMR in 71 cases (21%) and VLE targeted tissue was biopsied/resected in 80 cases (23.7%). Among pathology samples showing LGD and HGD, there was a statistically significant association where the same specimens being detected by VLE were also found as endoscopically recognized nodules removed by EMR. There was a similar trend for association of VLE and visualized nodules in cases that found EAC, but this was not statistically significant.

Discussion: Our high-volume single center study demonstrated a significant overlap in detecting both LGD and HGD among nodules found using careful endoscopic inspection and VLE detection. Multiple factors likely contributed to our outcomes, especially our high-volume experience with complex BE management. VLE could be a useful adjunct diagnostic tool in other centers with less BE experience. Ultimately, larger studies would be needed to find the most efficient and effective way to utilize this technology. 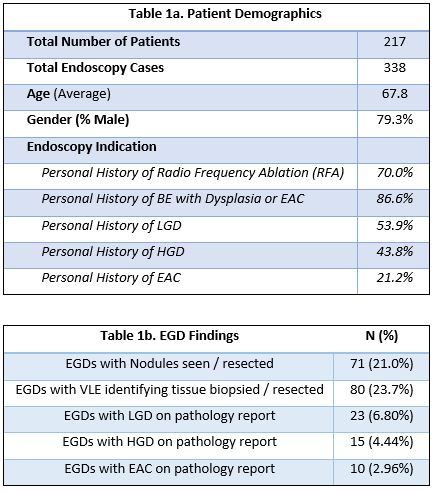