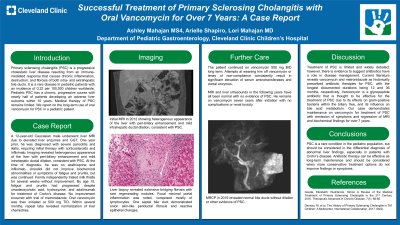 Introduction: Primary sclerosing cholangitis (PSC) is a progressive cholestatic liver disease resulting from an immune mediated response causing chronic inflammation, destruction, and fibrosis of both intra-and extrahepatic bile ducts. It is a rare disease in pediatric patients with an incidence of 0.22/100,000 children worldwide. Pediatric PSC has a chronic, progressive course with nearly half of patients developing an adverse liver outcome in 10 years. Medical therapy of PSC remans limited. We report on the long-term use of oral vancomycin for PSC in a pediatric patient.

Methods: An 11-year-old Caucasian male was diagnosed with severe pancolitis and ileitis, requiring initial therapy with corticosteroids and infliximab. One year later, he underwent liver MRI due to elevated liver enzymes and GGT. This revealed heterogeneous appearance of the liver with peri-biliary enhancement and mild intrahepatic ductal dilation, suggestive of PSC.  Liver biopsy showed cirrhosis with periductal fibrosis, consistent with PSC. At the time of diagnosis, he was on azathioprine and infliximab. Ursodiol did not improve biochemical abnormalities or improve symptoms of fatigue and pruritis, but was continued.  Family independently trialed milk thistle for weeks without improvement.  By age 15, fatigue and pruritis had progressed despite ursodeoxycholic acid, hydroxyzine, and biologic therapy for Crohn’s adalimumab.  Oral vancomycin 500 mg TID was then initiated. Within several months, repeat labs revealed normalization of liver chemistries. MRI and liver ultrasounds in the years that have followed have all been normal with no evidence of PSC. He remains on vancomycin seven years after initiation with no complications or renal toxicity.

Discussion: Treatment of PSC is widely debated; however, there is evidence to suggest antibiotics have a potential role in management. Current literature reveals vancomycin and metronidazole as historically prescribed antibiotic therapies for PSC, with the longest documented duration of 12 and 36 months, respectively. Vancomycin is a glycopeptide antibiotic that thought to be effective in PSC treatment through its effects on gram positive bacteria with in the biliary tree and influence of bile acid metabolism. Our case demonstrates maintenance on vancomycin for treatment of PSC with remission of symptoms, regression of MRI findings, and biochemical findings for over 7 years.