P0984 (S1933). - An Unexpected Cause of Dysphagia in a Patient Hospitalized for Nephrectomy 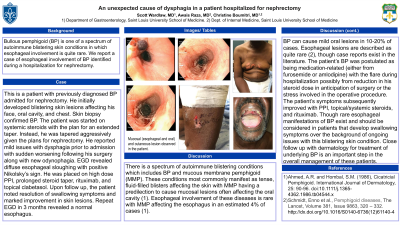 Methods: This is a patient with previously diagnosed BP admitted for nephrectomy. He initially developed blistering skin lesions affecting his face, oral cavity, and chest. Skin biopsy confirmed BP. The patient was started on systemic steroids with the plan for an extended taper. Instead, he was tapered aggressively given the plans for nephrectomy. He reported mild issues with dysphagia prior to admission with sudden worsening following his surgery along with new odynophagia. EGD revealed diffuse esophageal sloughing with positive Nikolsky’s sign. He was placed on high dose PPI, prolonged steroid taper, rituximab, and topical clobetasol. Upon follow up, the patient noted resolution of swallowing symptoms and marked improvement in skin lesions. Repeat EGD in 3 months revealed a normal esophagus.

Discussion: There is a spectrum of autoimmune blistering conditions which includes BP and mucous membrane pemphigoid (MMP). These conditions most commonly manifest as tense, fluid-filled blisters affecting the skin with MMP having a predilection to cause mucosal lesions often affecting the oral cavity1. Esophageal involvement of these diseases is rare with MMP affecting the esophagus in an estimated 4% of cases1. BP can cause mild oral lesions in 10-20% of cases. Esophageal lesions are described as quite rare2, though case reports exist in the literature. The patient’s BP was postulated as being medication-related (either from furosemide or amlodipine) with the flare during hospitalization possibly from reduction in his steroid dose in anticipation of surgery or the stress involved in the operative procedure. The patient’s symptoms subsequently improved with PPI, topical/systemic steroids, and rituximab. Though rare esophageal manifestations of BP exist and should be considered in patients that develop swallowing symptoms over the background of ongoing issues with this blistering skin condition. Close follow up with dermatology for treatment of underlying BP is an important step in the overall management of these patients. 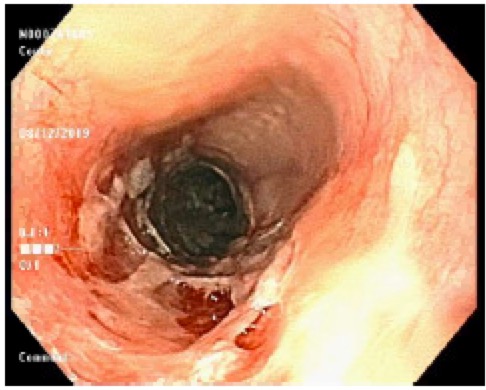 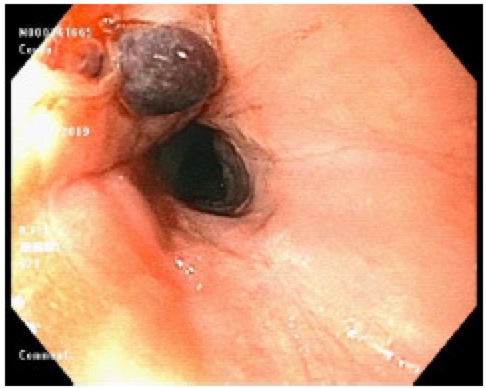