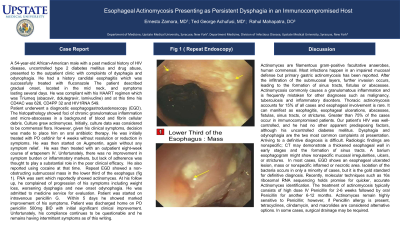 Introduction: Actinomyces are a Gram-positive anaerobic bacterium part of the normal flora of the human oropharyngeal, gastrointestinal and genitourinary tract. Infectious esophagitis caused by actinomyces is rare, with less than 30 cases reported in the English literature. Majority of cases involve immunocompromised patients and those with prior esophageal injury. Herein, we describe a case of a 50-year-old immunocompromised male who presented with complaints of dysphagia and was diagnosed with esophageal actinomycosis through biopsy of suspected lesions.

Methods: A 54 y.o male with a PMH of HIV and DMII presented with dysphagia and odynophagia. He had a recent candidal esophagitis. Patient was compliant with his antiretroviral therapy and had a low HIV viral load. EGD was done and showed a submucosal mass in the lower third of the esophagus (Fig.1). Biopsy showed chronic granulomatous inflammation and micro-abscesses. Culture grew Actinomyces. He was initially treated with PO Cefdinir for 4 weeks without resolution of symptoms, then started on Augmentin, again without any relief. Consensus was to treat with an eight-week course of ertapenem IV. Unfortunately, there was no improvement. Patient was admitted and started on iv Penicillin G.  Within 5 days there was marked improvement of his symptoms. He was discharged home on PO penicillin 500mg BID with initial good response. Unfortunately, he has continued to experience intermittent nausea, vomiting, and dysphagia as of this writing.

Discussion: Actinomycosis often happens after surgery, trauma, instrumentation or inflammatory processes. Co-infections with Actinobacillus, Eikenella, Fusobacterium and Candida is common. It can mimic malignancy, tuberculosis, or other more common disorders. Thoracic actinomycosis accounts only for 15% of all cases and esophageal infection is rare. Esophagitis, esophageal ulcerations, abscesses, fistulas, sinus tracts and strictures have been described. Around 75% of cases occur in immunocompromised hosts. Dysphagia and odynophagia are the most common complaints. Radiologic findings are nonspecific and EGD with biopsy is always needed. Isolation of the bacteria occurs in a minority of cases but it is the gold standard for diagnosis. Management consists of IV Penicillin followed by oral Penicillin for 6-12 months. Actinomyces remain highly sensitive to Penicillin however if allergy is present, tetracyclines, clindamycin, and macrolides are alternative options. In some cases, surgical drainage may be required.

Non obstructing mass on the lower third of the Esophagus.