Introduction: Fecal Microbiota Transplantation (FMT) has been shown to be a safe and efficacious treatment for C. difficile infections (CDI) and is being studied for other indications associated with dysbiosis. Within the medical community and lay public, awareness of FMT and interest around other potential applications has increased over time, as has willingness to perform or undergo the procedure.

Twitter, a social-media platform, has increasingly become a major source of news and information. With 71% of internet users accessing a social media site monthly and 330 million monthly active Twitter Users, Twitter has been heavily studied by consumer brands and data scientists to understand the attitudes and feelings of the general public.

Methods: This study retrospectively investigates the public’s interest in and opinions about FMT. Twitter’s Full Archive was searched for “Fecal Microbiota Transplantation” from 3/21/06 – 3/14/20. Tweets were stored on a SQLite database and analyzed with Python and Microsoft Excel.

There were 7,410 unique users who Tweeted about FMT. The sum of followers of all of these accounts tops 30 million. The number of exposures of FMT or times someone saw a Tweet about FMT nears 90 million.

FMT had many associations on Twitter. CDI came up the most frequently with 6,800 mentions and peak discussion in 2018. Next most frequent was ulcerative colitis with 3,120 mentions, peaking in 2019. Tweets about route of FMT peaked in 2017, coinciding with the publication of a randomized control trial looking at capsule vs. colonoscopic FMT. That year, there was consistently greater discussion about capsule delivery than colonoscopy. Furthermore, the polarity for capsule (.28) vs. colonoscopy (.11) was twice as positive. From Twitter analysis, it can be determined that there was strong, positive public interest for capsule over colonoscopy.

Discussion: Increased Twitter interactions amongst a large audience has contributed to greater public awareness around FMT over time. 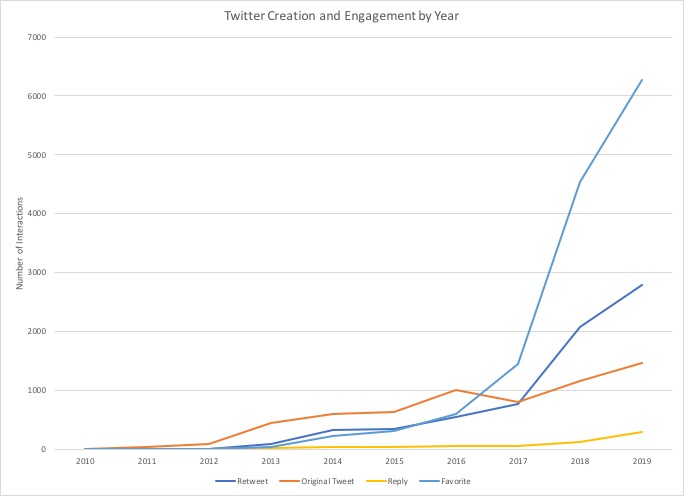 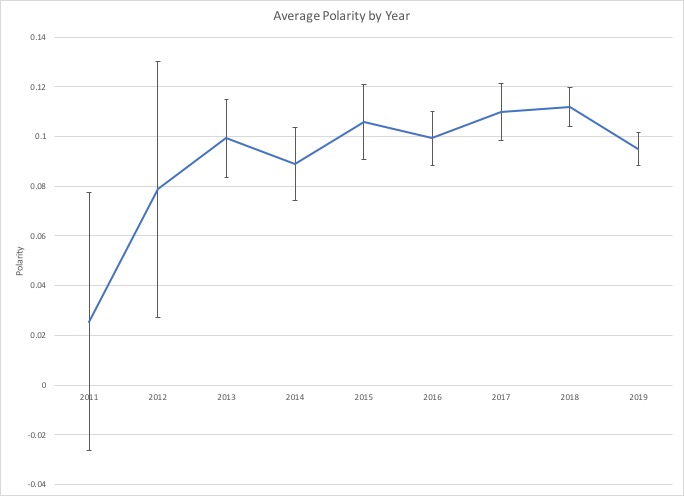 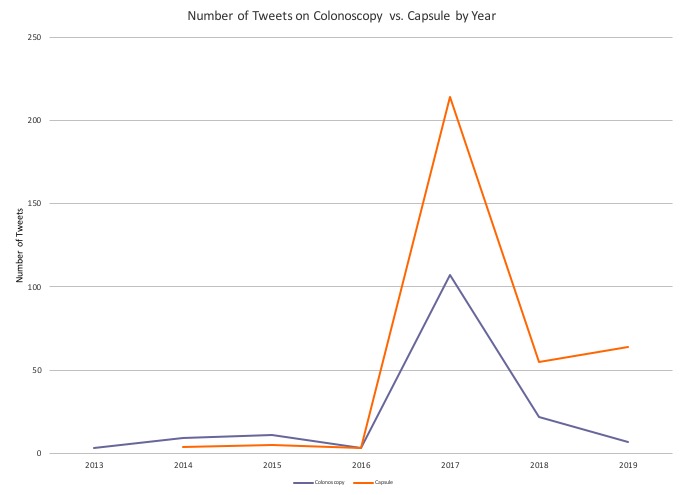 The total number of “Fecal Microbiota Transplantation” Tweets on colonoscopy and capsule each year.