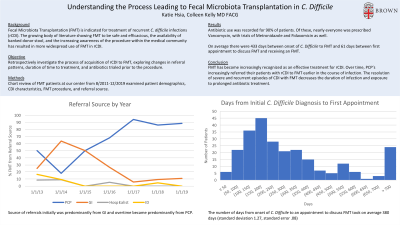 Introduction: Fecal Microbiota Transplantation (FMT) is indicated for treatment of recurrent C. difficile infections (rCDI). The growing body of literature showing FMT to be safe and efficacious, the availability of banked donor stool, and the increasing awareness of the procedure within the medical community has resulted in more widespread use of FMT in rCDI.  This study retrospectively investigates the process of acquisition of rCDI to FMT, exploring changes in referral patterns, duration of time to treatment, and antibiotics trialed prior to the procedure.

Methods: A detailed chart review of FMT patients treated at our center between August 2011 and December 2019 was performed. Data was collected on patient demographics, CDI characteristics, FMT procedure, and referral source.

The duration from onset of CDI to appointment with an FMT specialist to receiving an FMT varied greatly.  Patients waited an average of 380 days from initial CDI diagnosis to visit with an FMT specialist, with lengths ranging from less than one week to multiple years with waxing and waning courses. Patients waited an average for 61 days from first appointment with an FMT specialist to treatment with FMT. The length of wait decreased after 2014, with the introduction of banked donor stool. On average, 434 days elapsed from acquiring CDI to treatment with FMT.  The length of time between initial diagnosis and FMT steadily decreased from 2013 through 2018.

Patients who received FMT had extended courses of antibiotics before being referred to FMT. Antibiotic use was recorded for 90% of patients. Of these, nearly everyone was prescribed vancomycin, with trials of metronidazole and fidaxomicin as well.

Discussion: FMT has become increasingly recognized as an effective treatment for CDI. Over time, PCP’s increasingly referred their patients with rCDI to FMT earlier in the course of infection. The resolution of severe and recurrent episodes of CDI with FMT decreases the duration of infection and exposure to prolonged antibiotic treatment. 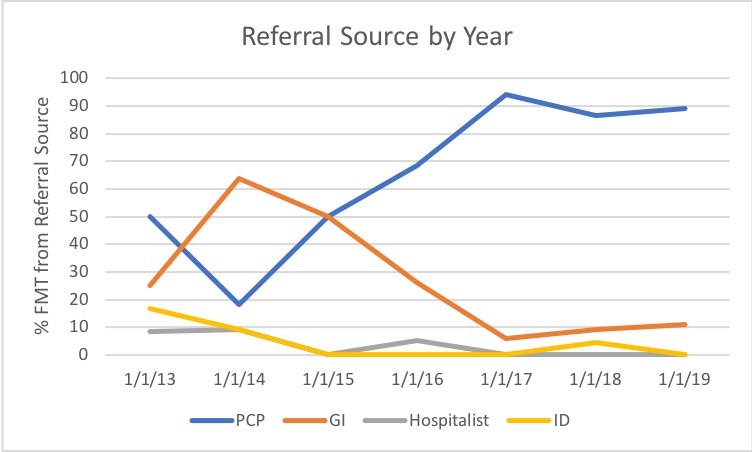 Specialty of referrer to FMT over time. Calculated as percentage of referrals from that specialty each year. 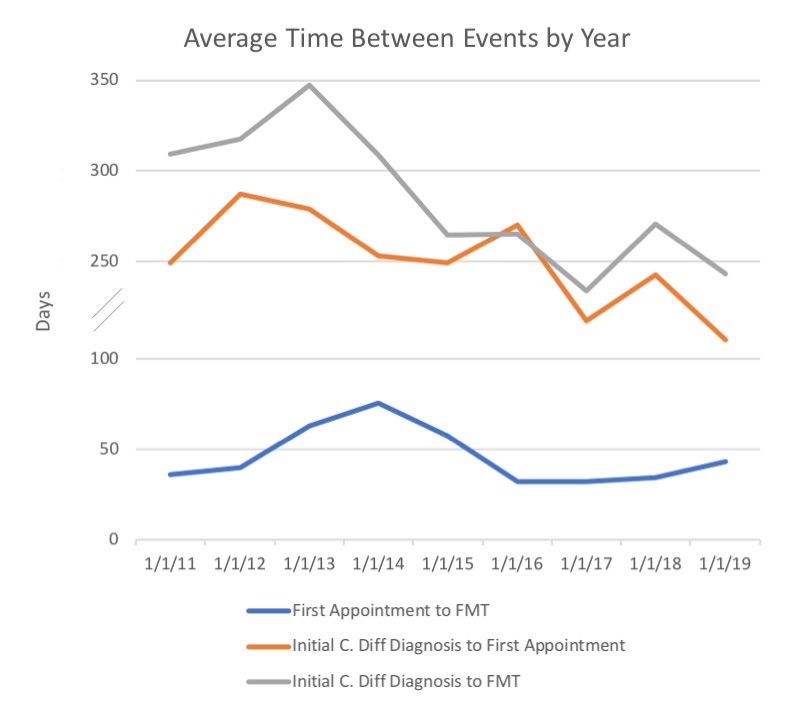 Average time of events in process of getting FMT. Average of number of days between of events of those that received FMTs each year. 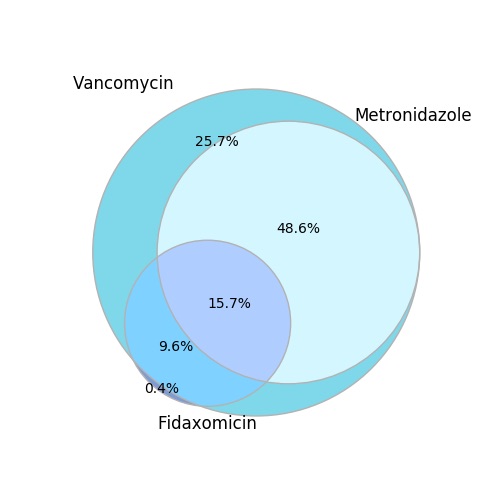 Distribution of antibiotics combinations taken by patients prior to obtaining FMT. Percentages calculated on total number of patients cumulatively.