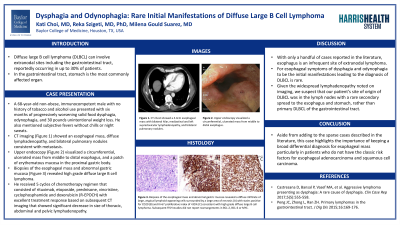 Introduction: Diffuse large B cell lymphoma (DLBCL) can involve extranodal sites including the gastrointestinal (GI) tract, reportedly occurring in up to 30% of patients. In the GI tract, stomach is the most commonly affected organ.

Methods: A 68-year-old non-obese, immunocompetent male with no history of tobacco and alcohol use presented with six months of progressively worsening solid food dysphagia, odynophagia, and 30 pounds unintentional weight loss. He also mentioned subjective fevers without chills or night sweats. CT imaging showed a 4.4 cm esophageal mass with hilar, mediastinal, supraclavicular, abdominal, iliac, and inguinal lymphadenopathy. Upper endoscopy visualized a circumferential, ulcerated mass from middle to distal esophagus, and a patch of erythematous mucosa in the proximal gastric body. Biopsies of the esophageal mass and abnormal gastric mucosa revealed high grade diffuse large B cell lymphoma with Ki67 proliferative index of >95%, and without evidence of Epstein-Barr Virus. Subsequent FISH studies did not report rearrangements in BCL-2, BCL-6 or MYC. He received 5 cycles of chemotherapy regimen that consisted of rituximab, etoposide, prednisone, vincristine, cyclophosphamide and doxorubicin (R-EPOCH) with excellent treatment response based on subsequent CT imaging that showed significant decrease in size of thoracic, abdominal and pelvic lymphadenopathy.

Discussion: With only a handful of cases reported in the literature, esophagus is an infrequent site of extranodal lymphoma. And for esophageal symptoms of dysphagia and odynophagia to be the initial manifestations leading to the diagnosis of DLBCL is rare. Given the widespread lymphadenopathy noted on imaging, we suspect that our patient’s site of origin of DLBCL was in the lymph nodes with a rare secondary spread to the esophagus and stomach, rather than primary DLBCL of the GI tract. Aside from adding to the sparse cases described in the literature, this case highlights the importance of keeping a broad differential diagnosis for esophageal mass particularly in patients who do not have the classic risk factors for esophageal adenocarcinoma and squamous cell carcinoma. Biopsies of the esophageal mass and abnormal gastric mucosa revealed a diffuse infiltrate of large, atypical lymphoid-appearing cells surrounded by a large area of necrosis (A) with stains positive for MUM-1 (B) and BCL-6 (C), consistent with high grade diffuse large B cell lymphoma.