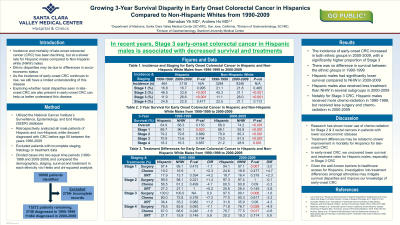 Introduction: In recent years, the incidence and mortality of late-onset colorectal cancer (CRC) have declined, but at a slower rate for Hispanic males compared to non-Hispanic white (NHW) males. Studies suggest people of low socioeconomic status receive less chemo-radiation, possibly contributing to the survival disparity. As we continue to shed light on the disparities in late-onset CRC, little is known about the growing problem of early-onset CRC. We investigated if treatment and survival disparities also exist in early-onset CRC for Hispanic males and NHW males.

Methods: We performed a retrospective analysis of early onset CRC cases in the National Cancer Institute’s Surveillance, Epidemiology, and End Results (SEER) Database. We analyzed all male patients of Hispanic and NHW descent diagnosed before age 50 between the years 1990 to 2009. Cases with incomplete staging, histology or treatment data were excluded from the analysis. Cases were then divided into two equal time periods, 1990-1999 and 2000-2009. In each time period, we analyzed changes in demographics, staging, survival and treatment via t-tests and chi-squared analysis.

Discussion: In late-onset CRC, research has shown decreased use of chemo-radiation for Stage 2 and 3 rectal cancers in patients with lower socioeconomic status, possibly contributing to worse survival in Hispanics compared to NHW. We similarly found lower survival rates in Hispanics in early onset colorectal in recent years. This disparity is associated with less treatments for Hispanics in Stage 3 CRC, the stage with the largest increase in incidence. Given the well-known barriers to healthcare access for Hispanics in late-onset CRC, further investigation into ethnic disparities may help mitigate survival differences and improve overall outcome in early-onset CRC.

Table 3. Treatment Differences in for Early Onset Colorectal Cancer in Hispanics and Non-Hispanic Whites from 1990-1999 to 2000-2009