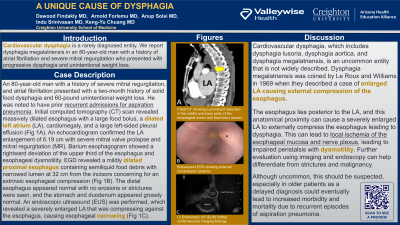 Introduction: Cardiovascular dysphagia is a rarely diagnosed entity. We report dysphagia megalatriensis in an 80-year-old man with a history of atrial fibrillation and severe mitral regurgitation who presented with progressive dysphagia and unintentional weight loss.

Methods: An 80-year-old man with a history of severe mitral regurgitation, and atrial fibrillation presented with a two-month history of solid food dysphagia and 60-pound unintentional weight loss. He was noted to have prior recurrent admissions for aspiration pneumonia. Initial computed tomography (CT) scan revealed massively dilated esophagus with a large food bolus, a dilated left atrium (LA), cardiomegaly, and a large left-sided pleural effusion (Figure 1A). An echocardiogram confirmed the LA enlargement of 6.19 cm with severe mitral valve prolapse and mitral regurgitation (MR). Barium esophagogram showed a rightward deviation of the upper third of the esophagus and esophageal dysmotility. Esophagogastroduodenoscopy (EGD) revealed a mildly dilated proximal esophagus containing semiliquid food debris with narrowed lumen at 32 cm from the incisors concerning for an extrinsic esophageal compression (Figure 1B). The distal esophagus appeared normal with no erosions or strictures were seen, and the stomach and duodenum appeared grossly normal. An endoscopic ultrasound (EUS) was performed, which revealed a severely enlarged LA that was compressing against the esophagus, causing esophageal narrowing (Figure 1C).

Discussion: Cardiovascular dysphagia, which includes dysphagia lusoria, dysphagia aortica, and dysphagia megalatriensis, is an uncommon entity that is not widely described. Dysphagia megalatriensis was coined by Le Roux and Williams in 1969 when they described a case of enlarged LA causing external compression of the esophagus.
The esophagus lies posterior to the LA, and this anatomical proximity can cause a severely enlarged LA to externally compress the esophagus leading to dysphagia. This can lead to local ischemia of the esophageal mucosa and nerve plexus, leading to impaired peristalsis with dysmotility. Further evaluation using imaging and endoscopy can help differentiate from strictures and malignancy.
Although uncommon, this should be suspected, especially in older patients as a delayed diagnosis could eventually lead to increased morbidity and mortality due to recurrent episodes of aspiration pneumonia.