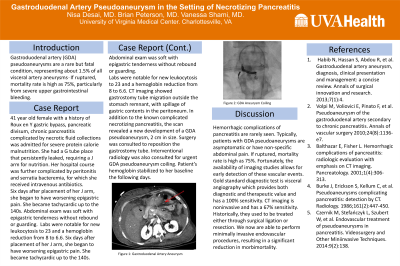 Introduction: Gastroduodenal artery (GDA) pseudoaneurysms are a rare but fatal condition, representing about 1.5% of all visceral artery aneurysms.. If ruptured, mortality rate is high as 75%, particularly from severe upper gastrointestinal bleeding. Fortunately, the availability of imaging studies allows for early detection of these vascular events. Historically, they used to be treated either through surgical ligation or resection. Currently, minimally invasive endovascular procedures can be performed, resulting in a significant reduction in morbimortality.

Methods: 41 year old female with a history of Roux en Y gastric bypass, pancreatic divisum, chronic pancreatitis complicated by necrotic fluid collections was admitted for severe protein calorie malnutrition. She had a G tube place that persistently leaked, requiring a J arm for nutrition. Her hospital course was further complicated by peritonitis and serratia bacteremia, for which she received intravenous antibiotics. Six days after placement of her J arm, she began to have worsening epigastric pain. She became tachycardic up to the 140s. Abdominal exam was soft with epigastric tenderness without rebound or guarding.  Labs were notable for new leukocytosis to 23 and a hemoglobin reduction from 8 to 6.6. CT imaging showed gastrostomy tube migration outside the stomach remnant, with spillage of gastric contents in the peritoneum. In addition to the known complicated necrotizing pancreatitis, the scan revealed a new development of a GDA pseudoaneurysm, 2 cm in size. Surgery was consulted to reposition the gastrostomy tube. Interventional radiology was also consulted for urgent GDA pseudoaneurysm coiling. Patient’s hemoglobin stabilized to her baseline the following days.

Discussion: Hemorrhagic complications of pancreatitis are rarely seen. Typically, patients with GDA pseudoaneurysms are asymptomatic or have non-specific abdominal pain. If ruptured, mortality rate is high as 75%. Fortunately, the availability of imaging studies allows for early detection of these vascular events. Gold standard diagnostic test is visceral angiography which provides both diagnostic and therapeutic value and has a 100% sensitivity. CT imaging is noninvasive and has a 67% sensitivity. Historically, they used to be treated either through surgical ligation or resection. We now are able to perform minimally invasive endovascular procedures, resulting in a significant reduction in morbimortality. 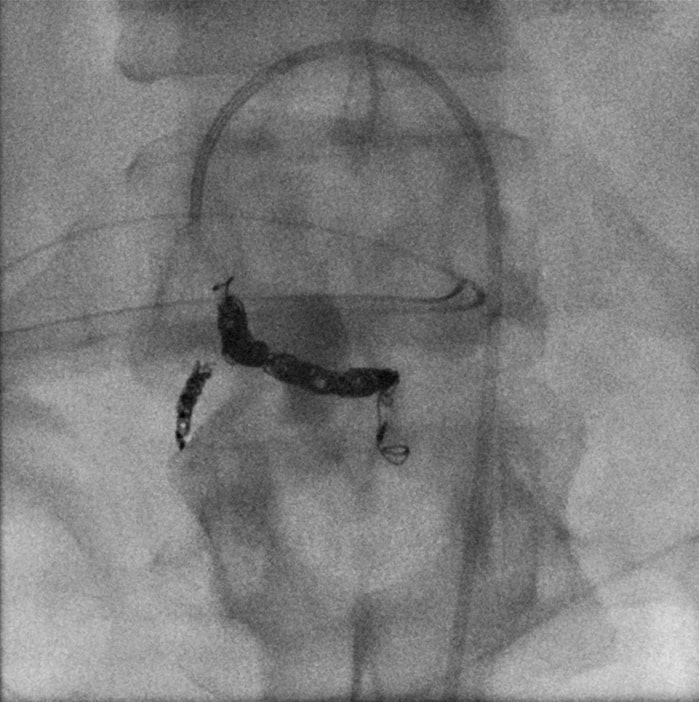 Transcatheter selective embolization via coiling of the gastroduodenal artery pseudoaneurysm