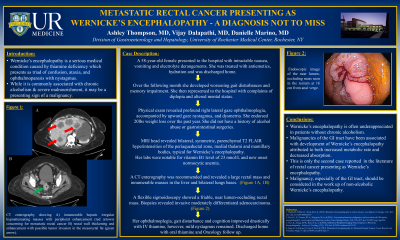 Introduction: Wernicke’s encephalopathy (WE) is a serious medical condition caused by thiamine deficiency. A high index of suspicion is needed when a patient presents with confusion, ataxia or diplopia as early treatment with IV thiamine is paramount to prevent long term complications. It is often underappreciated in nonalcoholics. Other causes of WE include malabsorption, malignancy or other systemic disorders that increase metabolic rate.

Methods: A 58-year-old female presented to the hospital with diplopia and altered mental status. One month prior to this presentation, she presented to the hospital with intractable nausea, vomiting and electrolyte derangements which improved with fluids and antiemetics. She then developed progressive confusion, gait disturbances, and memory impairment. Two days prior to her admission she complained of diplopia. Physical exam revealed profound right lateral gaze ophthalmoplegia, accompanied by upward gaze nystagmus, and dysmetria. She endorsed 20 pound intentional weight loss over the past year. She did not have a history of alcohol abuse or gastrointestinal surgeries. She was stared on IV thiamine empirically due to concerns for Wernicke encephalopathy. MRI head revealed bilateral, symmetric, parenchymal T2 FLAIR hyperintensities of the periaqueductal zone, medial thalami and mamillary bodies. Her labs were notable for vitamin B1 level of 23 nmol/L and new onset normocytic anemia. Gastroenterology was consulted for further workup for non-alcohol related WE. A CT enterography was recommended and revealed a large rectal mass and innumerable masses in the liver and bilateral lungs bases. A flexible sigmoidoscopy showed a friable, near lumen-occluding rectal mass. Biopsies revealed invasive moderately differentiated adenocarcinoma. Her ophthalmoplegia, gait disturbance and cognition improved drastically with IV thiamine, however, mild nystagmus remained. She was discharged home on oral thiamine and follow up with Oncology.

Discussion: Patients with malignancies, as with other systemic disorders, have increased metabolic rates, which may induce depletion of thiamine. Malignancies of the GI tract have been particularly associated with the development of WE, believed to be due to the added mechanism of impaired absorption. This is only the second case in the literature of rectal cancer presenting as WE. Malignancy, especially of the GI tract, should be considered in the workup of nonalcoholic WE.