P0939 (S1888). - Not All Worsening Ascites Is Due to Decompensated Liver Cirrhosis 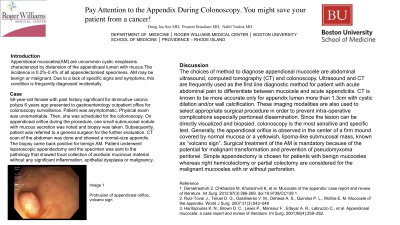 Methods:
We present the case of a 59 year old male with a history of liver cirrhosis, hepatitis C and alcohol use disorder who presented to the ED with decompensated liver cirrhosis as evidenced by increasing ascites and abdominal pain. He also complained of a 2 week history of dysphagia to solids but not liquids. His labs showed hyperkalemia, acute kidney injury and hyponatremia. He was then admitted to the hospital for further management. He underwent a large volume paracentesis draining 10L of ascetic fluid that was sent for analysis. The latter revealed the presence of adenocarcinoma cells. Because of the patient’s AKI, a CT scan with contrast was not done. Because of dysphagia in setting of chronic alcoholism, smoking and malignant ascetic fluid, an upper endoscopy was performed. It showed a large esophageal mass in the distal part of the esophagus. Biopsy of the mass confirmed the presence of invasive esophageal adenocarcinoma.


Discussion:
The pathophysiology of malignant ascites is not clearly understood. It has been postulated that the presence of tumor cells in the lymphatic system induces the production of Vascular Endothelial Growth Factor and Basic-Fibroblastic Growth Factor leading to an increase in capillary permeability due to changes in capillary hemodynamic following Starling’s law. Furthermore, the malignant cells may also cause lymphatic obstruction and decrease in fluid evacuation from peritoneal cavity leading to the formation of ascites.

Delineating the primary source of malignancy in patients with malignant ascites can be challenging. Gastrointestinal malignancies as a primary source account for up to 25% of cases. After a thorough evaluation with imaging modalities (if possible) and even in the absence of suggestive symptoms, upper and lower endoscopic evaluation may be warranted. If the endoscopies fail to reveal a source, diagnostic laparoscopy may be indicated in certain cases.